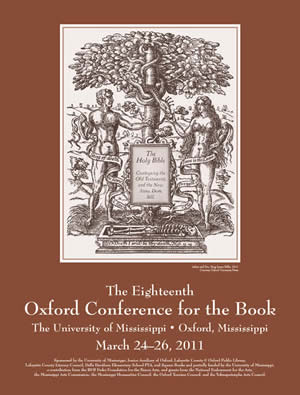 Recently heralded young American writers will be featured in the 2011 Oxford Conference for the Book March 24 – 26.  Karen Russell, Téa Obreht, Kevin Brockmeier, and Justin Taylor, among others, will be here in support of their new books.

The highly-regarded book reviewer, Janet Maslin, has called Karen Russell’s Swamplandia! a “wave-making debut novel.”  Russell’s first book—a collection of short stories titled St. Lucy’s Home for Girls Raised by Wolves—was a huge success, landing her on most critics’ year-end lists. She came to Square Books in 2006 to read from and sign copies of the collection.  She will return to Oxford as a book conference panelist along with writers Tom Franklin and Kevin Brockmeier on Saturday, March 26 at 4 p.m.

Téa Obreht’s first novel, The Tiger’s Wife, also received an excellent review in the New York Times, from the famously fastidious critic, Michiko Kakutani. The Tiger’s Wife is “a precocious debut…a richly textured and searing novel,” writes Kakutani, further asserting that Obreht “writes with remarkable authority and eloquence, and she demonstrates an uncommon ability to move seamlessly between the gritty realm of the real and the more primary-colored world of the fable.”  The precocious Ms. Obreht, a Serbian native who is twenty-five years old, will be joined by author Justin Taylor and moderator Lyn Roberts for a reading at the book conference on Friday, March 25 at 1:30 p.m.

In his new novel, The Illumination, Kevin Brockmeier “devotes his considerable gifts of description to the illuminated wounds of his characters” in a book that is “deeply felt and precisely observed,” according to Scott Hutchins in the New York Times.  Kevin, who lives in Arkansas and has visited Square Books previously, will join Karen Russell and Tom Franklin on Saturday, March 26 at 4 p.m.

Justin Taylor’s new novel, The Gospel of Anarchy, is the follow up to his debut collection of short stories, Everything Here is the Best Thing Ever, a staff favorite at Square Books.

There are many other notable authors appearing at this year’s conference, which includes the first panel on graphic novels, one that includes recent best graphic novel of the year nominee (National Cartoonist Society) Joyce Farmer, Michael Kupperman, Joe Matt, and Jack Pendarvis.   The “Comic Book Auteurs” panel will be held Saturday, March 26 at 2 p.m.

A full list of writers and participants at the conference as well as a detailed schedule can be found here.