The Rescue Artist: A True Story of Art, Thieves, and the Hunt for a Missing Masterpiece (Paperback) 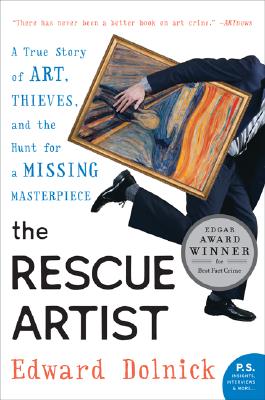 The Rescue Artist: A True Story of Art, Thieves, and the Hunt for a Missing Masterpiece (Paperback)

In the predawn hours of a gloomy February day in 1994, two thieves entered the National Gallery in Oslo and made off with one of the world's most famous paintings, Edvard Munch's Scream. It was a brazen crime committed while the whole world was watching the opening ceremonies of the Winter Olympics in Lillehammer. Baffled and humiliated, the Norwegian police turned to the one man they believed could help: a half English, half American undercover cop named Charley Hill, the world's greatest art detective.

The Rescue Artist is a rollicking narrative that carries readers deep inside the art underworld -- and introduces them to a large and colorful cast of titled aristocrats, intrepid investigators, and thick-necked thugs. But most compelling of all is Charley Hill himself, a complicated mix of brilliance, foolhardiness, and charm whose hunt for a purloined treasure would either cap an illustrious career or be the fiasco that would haunt him forever.

Edward Dolnick is the author of Down the Great Unknown, The Forger’s Spell, and the Edgar Award-winning The Rescue Artist. A former chief science writer at the Boston Globe, he lives with his wife near Washington, D.C.

“The Rescue Artist is a masterpiece. Engrossing, entertaining, often surreally hilarious.”
— —Mary Roach, author of Stiff: The Curious Lives of Human Cadavers on The Rescue Artist

“The narrative’s frequent detours to other crimes and engaging escapades...elevate this work above last year’s similar The Irish Game.”
— —Publishers Weekly

“There has never been a better book on art crime.”
— Milton Esterow, ArtNews

“An entertaining account of the eternal struggle between high art and low cunning.”
— Time magazine

“There has never been a better book on art crime.”
— ArtNews

“Dolnick...writes with a crisp, breezy style that runs with the speed of thieves purloining stolen canvases.”
— Donald Harington, Atlanta Journal-Constitution