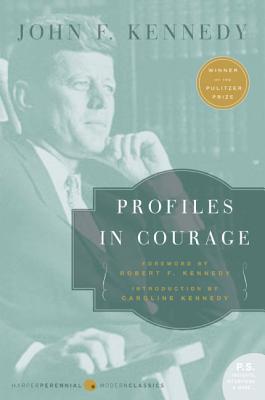 With a foreword by Robert F. Kennedy and introduction by Caroline Kennedy

John F. Kennedy’s enduring classic resounds with timeless lessons on the most cherished of virtues—courage and patriotism—and remains a moving, powerful, and relevant testament to the indomitable American spirit

During 1954-55, Kennedy, then a junior senator from the state of Massachusetts, profiled eight American patriots, mainly United States Senators, who at crucial moments in our nation’s history, revealed a special sort of greatness: men who disregarded dreadful consequences to their public and private lives to do that one thing which seemed right in itself. They were men of various political and regional allegiances—their one overriding loyalty was to the United States.

Courage such as these men shared, Kennedy makes clear, is central to all morality—a man does what he must in spite of personal consequences—and these exciting stories suggest that, without in the least disparaging the courage with which men die, we should not overlook the true greatness adorning those acts of courage with which men must live.

As Robert F. Kennedy writes in the foreword, Profiles in Courage “is not just stories of the past but a book of hope and confidence for the future. What happens to the country, to the world, depends on what we do with what others have left us."

This special "P.S." edition of the book commemorates the fiftieth anniversary of the book's publication. It includes vintage photographs and an extensive author biography, and features Kennedy's correspondence about the writing project, contemporary reviews of the book, a letter from Ernest Hemingway, and two rousing speeches from recipients of the Profile in Courage Award.

John F. Kennedy (1917-1963) was president of the United States from 1961 to 1963. At forty-three, he was the youngest man ever elected to the Oval Office and the first Roman Catholic president.

“It is refreshing and enlightening to have a first-rate politician write a thoughtful and persuasive book about political integrity.” — New York Times Book Review

“A book that deserves reading by every American.” — Springfield Republican