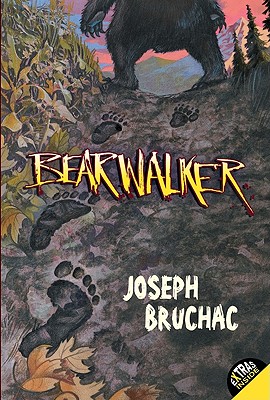 From Joseph Bruchac, the author of the award-winning middle-grade thrillfest Skeleton Man, comes another creepy tale inspired by the folklore of indigenous Americans.

Baron has always been fascinated by bears—their gentle strength and untamed power. But the Bearwalker legend, passed down by his Mohawk ancestors, tells of a different kind of creature—a terrible mix of human and animal that looks like a bear but is really a bloodthirsty monster.

The tale never seemed to be more than a scary story . . . until a class camping trip deep in the Adirondacks, when Baron comes face-to-face with an evil being that is all too real.

Joseph Bruchac is the author of Skeleton Man, The Return of Skeleton Man, Bearwalker, The Dark Pond, and Whisper in the Dark, as well as numerous other critically acclaimed novels, poems, and stories, many drawing on his Abenaki heritage. Mr. Bruchac and his wife, Carol, live in upstate New York, in the same house where he was raised by his grandparents. You can visit him online at www.josephbruchac.com.

Sally Wern Comport has been making pictures professionally since the age of sixteen. Her images have been seen in the editorial, advertising, and publishing markets worldwide, and her work includes the picture book Brave Margaret: An Irish Adventure, by Robert D. San Souci. She lives in Annapolis, Maryland, with her studio partner -- husband and their two daughters, Taylor and Olivia, and she recently completed her graduate education at Syracuse University to further her passion for the art of illustration.

“This fast-paced survival story is a great read for mystery fans, and it also addresses the delicate balance between humans and nature.”
— School Library Journal (starred review)

“Bruchac spins a striking story, filled with interesting information about bears, chilling moments around the campfire, and life–or–death chase scenes. Readers will return again and again to this adventure tale.”
— Bulletin of the Center for Children’s Books