The Motel Life: A Novel (Paperback) 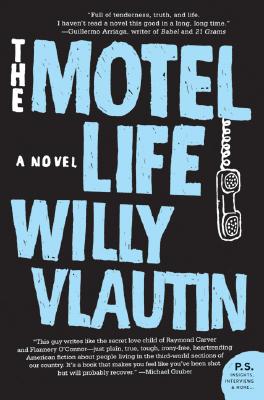 The Motel Life: A Novel (Paperback)

I probably look forward to Willy Vlautin's new books more than any other writer working today. The Motel Life was his first novel and a film based on the book has just been released. His movels are about the down and out, full of heartbreak yet in the end hopeful.

With "echoes of Of Mice and Men"(The Bookseller, UK), The Motel Life explores the frustrations and failed dreams of two Nevada brothers—on the run after a hit-and-run accident—who, forgotten by society, and short on luck and hope, desperately cling to the edge of modern life.

“If there’s any justice, anywhere, The Motel Life will be widely read and widely admired.” — Booklist

“Both heartbreaking and inspirational…written…with a simple hypnotic tone that seems as if it was grown in the Reno heat.” — Associated Press ASAP

“The furthest Vlautin’s men can move is in circles, shackled to their dysfunctions and their meager paychecks…” — San Francisco Weekly

“I’m floored…This book feel so damn real, so powerful, so much like life, even if it’s not yours.” — Jonathan Zwickel, The Stranger