The House at the End of the Road: The Story of Three Generations of an Interracial Family in the American South (Hardcover) 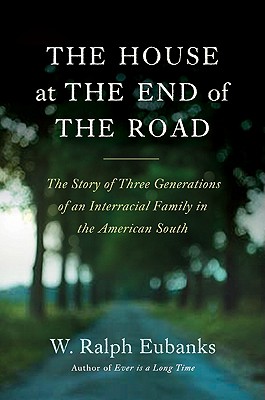 The House at the End of the Road: The Story of Three Generations of an Interracial Family in the American South (Hardcover)

In 1914, in defiance of his middle-class landowning family, a young white man named James Morgan Richardson married a light-skinned black woman named Edna Howell. Over more than twenty years of marriage, they formed a strong family and built a house at the end of a winding sandy road in South Alabama, a place where their safety from the hostile world around them was assured, and where they developed a unique racial and cultural identity. Jim and Edna Richardson were Ralph Eubanks's grandparents.

Part personal journey, part cultural biography, The House at the End of the Road examines a little-known piece of this country's past: interracial families that survived and prevailed despite Jim Crow laws, including those prohibiting mixed-race marriage. As he did in his acclaimed 2003 memoir, Ever Is a Long Time, Eubanks uses interviews, oral history, and archival research to tell a story about race in American life that few readers have experienced. Using the Richardson family as a microcosm of American views on race and identity, The House at the End of the Road examines why ideas about racial identity rooted in the eighteenth century persist today. In lyrical, evocative prose, this extraordinary book pierces the heart of issues of race and racial identity, leaving us ultimately hopeful about the world as our children might see it.

W. Ralph Eubanks is the author of Ever Is a Long Time, which Washington Post book critic Jonathan Yardley named as one of the best nonfiction books of 2003. A 2007 Guggenheim Fellow, he is currently a Bernard Schwartz Fellow at the New America Foundation. He lives in Washington, D.C., with his wife and three children.

Eubanks pieces together this intricate story across three generations of his family, and in turn sheds powerful new light on the complex story of race and identity in these United States. A pleasure to read, a poignant American story not to be missed. — Dave Isay, founder of StoryCorps

Eubanks’s grandparents created an interracial family in rural Alabama nearly a century ago. Now he has taken his family’s story and used it to explore our changing AMerican ideas about what to make of our ancestries. His work should inspire all of us to think anew about our country. — K. Anthony Appiah, Laurance S. Rockefeller University Professor of Philosophy, Princeton University

Eubanks writes with a novelist’s sense of story and a poet’s eye for language and detail. Most important, though, he writes with sensitivity, understanding, and Socratic wisdom. This is not just an important book for these timse--it’s a book for all time. — Steve Yarbrough, author of Prisoners of War

PRAISE FOR EVER IS A LONG TIME: “A gift to everyone who reads it, a book that is at once a touching family memoir and an attempt—successful—to come to terms with the author’s past.... It is, in all respects, an exemplary and admirable piece of work.” — Washington Post

“Compelling...by turns a charming remembrance of a rural childhood and a chilling reminder of racism’s legacy.” — BookPage

“Ralph Eubanks’s Mississippi detective story wrapped in a memoir is a remarkable journey back to the civil rights future. This wistful little book holds a significance as rich as Delta loam.” — David Levering Lewis, author of WEB DU BOIS: The Fight for Equality and the American Century