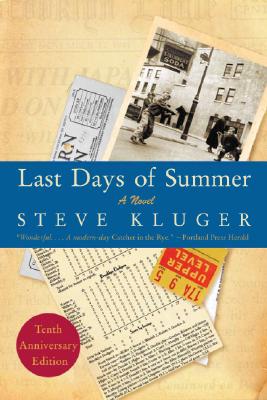 I can't imagine anyone not liking this book. Set in 1940s Brooklyn, it's about 10 year old outcast Joey Margolis who is in search of a hero. Joey lands on Charlie Banks, the star third baseman for the NY Giants. Told through letters, postcards, and newspaper clippings the result is a sweet (but not too sweet) hilarious novel with a big heart that will appeal to all ages.

Last Days of Summer is the story of Joey Margolis, neighborhood punching bag, growing up goofy and mostly fatherless in Brooklyn in the early 1940s. A boy looking for a hero, Joey decides to latch on to Charlie Banks, the all-star third basemen for the New York Giants. But Joey's chosen champion doesn't exactly welcome the extreme attention of a persistent young fan with an overactive imagination. Then again, this strange, needy kid might be exactly what Banks needs.

Steve Kluger has written extensively on subjects as far-ranging as World War II, rock 'n' roll, and the Titanic, and as close to the heart as baseball and the Boston Red Sox. He lives in Santa Monica, California.