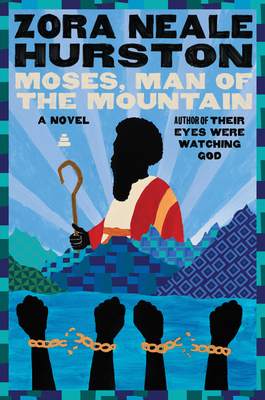 In this 1939 novel based on the familiar story of the Exodus, Zora Neale Hurston blends the Moses of the Old Testament with the Moses of black folklore and song to create a compelling allegory of power, redemption, and faith. Narrated in a mixture of biblical rhetoric, black dialect, and colloquial English, Hurston traces Moses's life from the day he is launched into the Nile river in a reed basket, to his development as a great magician, to his transformation into the heroic rebel leader, the Great Emancipator. From his dramatic confrontations with Pharaoh to his fragile negotiations with the wary Hebrews, this very human story is told with great humor, passion, and psychological insight—the hallmarks of Hurston as a writer and champion of black culture.

Zora Neale Hurston was a novelist, folklorist, and anthropologist. An author of four novels (Jonah’s Gourd Vine, 1934; Their Eyes Were Watching God, 1937; Moses, Man of the Mountain, 1939; and Seraph on the Suwanee, 1948); two books of folklore (Mules and Men, 1935, and Tell My Horse, 1938); an autobiography (Dust Tracks on a Road, 1942); and over fifty short stories, essays, and plays. She attended Howard University, Barnard College and Columbia University, and was a graduate of Barnard College in 1927. She was born on January 7, 1891, in Notasulga, Alabama, and grew up in Eatonville, Florida. She died in Fort Pierce, in 1960.  In 1973, Alice Walker had a headstone placed at her gravesite with this epitaph: “Zora Neale Hurston: A Genius of the South.”