The Devils of Loudun (Paperback) 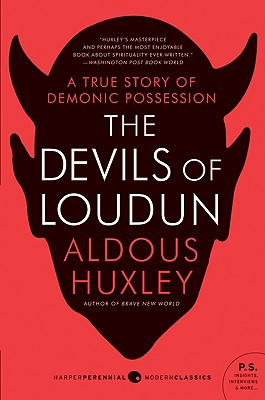 The Devils of Loudun (Paperback)

“HUXLEY'S MASTERPIECE AND PERHAPS THE MOST ENJOYABLE BOOK ABOUT SPIRITUALITY EVER WRITTEN. .” — Washington Post Book World

Aldous Huxley's "brilliant" (Los Angeles Times) and gripping account of one of the strangest occurrences in history, hailed as the "peak achievement of Huxley’s career" by the New York Times

In 1632 an entire convent in the small French village of Loudun was apparently possessed by the devil. After a sensational and celebrated trial, the convent's charismatic priest Urban Grandier—accused of spiritually and sexually seducing the nuns in his charge—was convicted of being in league with Satan. Then he was burned at the stake for witchcraft.

A remarkable true story of religious and sexual obsession, The Devils of Loudon is considered by many to be Brave New World author Aldous Huxley's nonfiction masterpiece.

Aldous Huxley (1894–1963) is the author of the classic novels Brave New World, Island, Eyeless in Gaza, and The Genius and the Goddess, as well as such critically acclaimed nonfiction works as The Perennial Philosophy and The Doors of Perception. Born in Surrey, England, and educated at Oxford, he died in Los Angeles, California.

“A brilliant book . . . “The Devils of Loudun” shows Huxley’s genius at its best: It’s his scientific, almost forensic and detailed approach that makes us feel the truth and horror of what happened long ago in France. — Los Angeles Times

“Huxley’s masterpiece and perhaps the most enjoyable book about spirituality ever written. In telling the grotesque, bawdy and true story of a 17th-century convent of cloistered French nuns who contrived to have a priest they never met burned alive as a warlock . . . Huxley painlessly conveys a wealth of information about mysticism and the unconscious.” — Washington Post Book World

“Here is the stuff that bizarre historical novels are made, but it is solidly based on fact and painstaking research. . . . This peak achievement of Huxley’s career reveals his sharp skill at characterization, his ability to recreate the smell and flavor of vanished eras. . . . A story that sounds like fiction but isn’t.” — New York Times

“One of the best books by Aldous Huxley, both as a writer and as a thinker.” — The Guardian (UK)

“An exciting and indeed compelling social-psychological interpretation of one of the strangest occurrences in history.” — Sociology and Social Research