The Man Behind the Nose: Assassins, Astronauts, Cannibals, and Other Stupendous Tales (Hardcover) 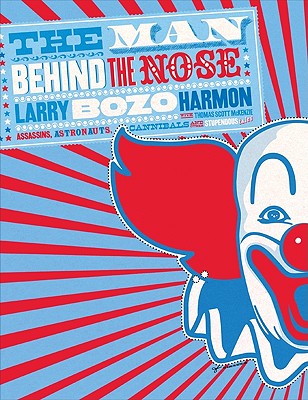 The Man Behind the Nose: Assassins, Astronauts, Cannibals, and Other Stupendous Tales (Hardcover)

The Man Behind the Nose is the autobiography of the man who was Bozo. For 50 years Larry Harmon was the face—and the nose—of Bozo the Clown, the most well-known, beloved clown of them all, the precursor for every successful modern-day harlequin to come, from Ronald McDonald to Krusty. A warm, surprising, and endlessly entertaining life story filled to the brim with “Assassins, Astronauts, Cannibals, and Other Stupendous Tales,” The Man Behind the Nose is a rollicking ride through the world of a true American icon in greasepaint.

Larry Harmon produced some 50,000 hours of local and international live children's television shows. He is best-known for his fifty-year-plus run as the driving force behind Bozo the World's Most Famous Clown. After purchasing the rights to the character, Harmon spread Bozo to almost 200 television stations all over the globe, including Greece, Thailand, and Brazil. Harmon also owned the Laurel & Hardy characters, produced the 1974 biopic It's Good to be Alive directed by Michael Landon, and made many other contributions to the entertainment world and popular culture. In 1996, the Academy of Television Arts & Sciences awarded him a special outstanding achievement award for a long career that touched the hearts, mind, and funny bones of millions of people. Larry Harmon passed away on July 3, 2008.

Thomas Scott McKenzie has written for Premier Guitar, Tin House, Stuff, Paste, Sync, Inked, and other publications. McKenzie runs Slushpile.net, and he coauthored The Man Behind the Nose, the autobiography of Larry "Bozo the Clown" Harmon.