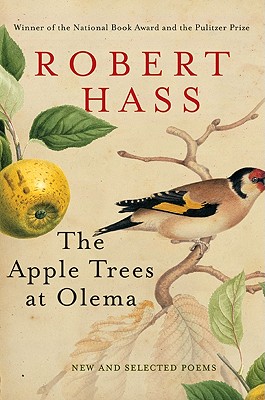 The National Book Award-winning author of Time and Materials, Robert Hass is one of the most revered of all living poets. With The Apple Trees at Olema, the former Poet Laureate and winner of the 2008 Pulitzer Prize offers twenty new and selected poems grounded in the beauty of the physical world. As with all of the collections of this great artist’s work, published far too infrequently, The Apple Trees at Olema is a cause for celebration.

Robert Hass was born in San Francisco. His books of poetry include The Apple Trees at Olema (Ecco, 2010), Pulitzer Prize and National Book Award winner Time and Materials (Ecco, 2008), Sun Under Wood (Ecco, 1996), Human Wishes (1989), Praise (1979), and Field Guide (1973), which was selected by Stanley Kunitz for the Yale Younger Poets Series. Hass also co-translated several volumes of poetry with Nobel Laureate Czeslaw Milosz and authored or edited several other volumes of translation, including Nobel Laureate Tomas Tranströmer's Selected Poems (2012) and The Essential Haiku: Versions of Basho, Buson, and Issa (1994). His essay collection Twentieth Century Pleasures: Prose on Poetry (1984) received the National Book Critics Circle Award. Hass served as Poet Laureate of the United States from 1995 to 1997 and as Chancellor of the Academy of American Poets. He lives in California with his wife, poet Brenda Hillman, and teaches at the University of California, Berkeley.

“Hass’s achievement is often nothing less than splendid. . . . Conscious of language and its limitations, the tug-of-war between mind and body, Hass’s newest work still manages to wholeheartedly engage with the world around him . . . a generous gift for any reader.”
— Washington Post

“THE APPLE TREES AT OLEMA...masterly conveys the beauty and fragility of the physical world....earthy yet illuminating, complex yet clear-eyed....The result is poetry that seems to breathe, inhaling softly in some cases, exhaling sharply in others.”
— Christian Science Monitor

“[A] lustrous retrospective collection...Hass distills experiences down to their essence as he limns landscapes, portrays friends and loved ones, and imagines the struggles of strangers. The ordinary is cracked open to reveal metaphysical riddles in poems that feel so natural, their formal complexities nearly elude our detection.”
— Booklist

“A milestone in what is generally regarded as one of the more successful careers in contemporary American poetry...Reading a good Hass poem...is like watching a painter whose brush strokes are so reassuringly steady you hardly notice how much complex and unsettling depth has been added to the canvas.”
— New York Times Book Review

“The new poems show Hass at the height of his narrative powers... He tries to get every word he can into each line, every detail he can into each poem, as though, if these feats are possible, then it’s also possible to save some part of the world from dissolution.”
— Publishers Weekly (starred review)