The Glorious Adventures of the Sunshine Queen (Hardcover) 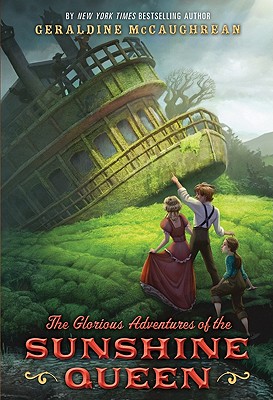 The Glorious Adventures of the Sunshine Queen (Hardcover)

Ever since the magnificent Miss Loucien gave up teaching to join the Bright Lights Theater Company, school days have lacked a certain . . . drama . . . especially for Cissy, who longs for a life in show business, and Kookie, who craves adventure. But when a diphtheria outbreak interrupts the dull routine, Cissy and Kookie are evacuated to the doubtful safety of the Bright Lights’ summer home—a shipwrecked paddle steamer on the flooded Missouri River.

Thus begins a wild and unpredictable journey downstream serving up grand performances, aggrieved river gamblers, irate lawmen, and perilous races. And when at long last Cissy steps into the limelight, the stakes are higher than she ever imagined.

Geraldine McCaughrean is the Printz Award-winning author of The White Darkness. She has been honored with England's most prestigious children's book award, the Carnegie Medal, and is the only three-time winner ever of the Whitbread Children's Book Award. She also wrote Peter Pan in Scarlet, the first official sequel to the treasured masterpiece Peter Pan, and the critically acclaimed The Death-Defying Pepper Roux. Geraldine lives in Berkshire, England, with her husband and actress daughter.

“Mark Twain and Sid Fleischman must surely be nodding their posthumous approval of so imaginative a cast and so preposterous and cunningly devised a plot—exactly the kind of story for which the term “rollicking” was coined.”
— Bulletin of the Center for Children’s Books (starred review)

“Cissy is a wonderful creation: inquisitive and adventurous. . . The ensemble cast of characters fairly brims with quirky, original characterization in this warmhearted paean to the milieu of Mark Twain and the tall tales of the American West.”
— The Horn Book

“Pirates carouse, boilers explode, gamblers swindle, and Cissy and company meet each encounter with equal parts luck and pluck. McCaughrean invests her characters with humanity and shows a farcical sense for dialogue, while her arch narrative voice, with its theatrical vocabulary and clever turns of phrase, is a delight.”
— Booklist

“Those readers who like their adventures with heavy doses of plot twists and tomfoolery will be smitten.”
— Kirkus Reviews

“The whole is a more whimsical, French cousin to Neil Gaiman’s The Graveyard Book (2008), with a similar sort of timelessly classic feel.”
— Booklist (starred review)

“This novel will be savored.”
— School Library Journal (starred review)

“Creating vivid characters is just one of McCaughrean’s gifts. Readers will root for Pepper to get the ending he deserves—a happy one.”
— Publishers Weekly (starred review)

“[T]horoughly entertaining. It’s McCaughrean’s way with language that establish[es] this picaresque tale as the latest evidence that she is one of the more remarkable novelists writing for children today.”
— The Horn Book