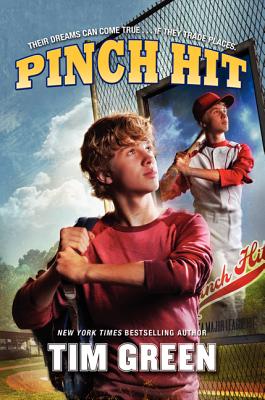 Trevor and Sam look alike. But their lives couldn't be more different.

Trevor is a movie star, living the Hollywood life in a huge mansion with his own limo, pool, and bowling alley. There's nothing he doesn't have except the one thing he wants most: to play baseball for real.

Sam is a regular kid who seems to have what it takes to make it to baseball's Major Leagues. He's determined to get the scouts at the big USC tournament to recognize his talent. And he really wants to see his dad, a struggling screenwriter, realize his own dream.

When Sam signs up at Casting Central to make some extra money, he and Trevor come together on a movie set and see the chance to trade places—to pinch hit for each other and make everyone's dreams come true.

At first, it's all good. . . . But what happens when the boys take their game too far?

Exciting and humorous. Many young readers will enjoy this lighthearted and fast-moving modern take on a familiar plot device, including fans of Green’s other sports novels.
— Booklist