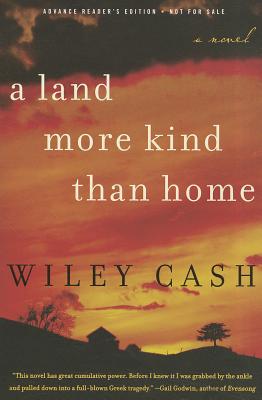 “This book will knock your socks off….A first novel that sings with talent.”
—Clyde Edgerton

A stunning debut reminiscent of the beloved novels of John Hart and Tom Franklin, A Land More Kind Than Home is a mesmerizing literary thriller about the bond between two brothers and the evil they face in a small western North Carolina town

For a curious boy like Jess Hall, growing up in Marshall means trouble when your mother catches you spying on grown-ups. Adventurous and precocious, Jess is enormously protective of his older brother, Christopher, a mute whom everyone calls Stump. Though their mother has warned them not to snoop, Stump can't help sneaking a look at something he's not supposed to—an act that will have catastrophic repercussions, shattering both his world and Jess's. It's a wrenching event that thrusts Jess into an adulthood for which he's not prepared. While there is much about the world that still confuses him, he now knows that a new understanding can bring not only a growing danger and evil—but also the possibility of freedom and deliverance as well.

Told by three resonant and evocative characters—Jess; Adelaide Lyle, the town midwife and moral conscience; and Clem Barefield, a sheriff with his own painful past—A Land More Kind Than Home is a haunting tale of courage in the face of cruelty and the power of love to overcome the darkness that lives in us all. These are masterful portrayals, written with assurance and truth, and they show us the extraordinary promise of this remarkable first novel.

Wiley Cash is the New York Times bestselling author of A Land More Kind Than Home, the acclaimed This Dark Road to Mercy, and most recently The Last Ballad. He won the SIBA Book Award and the Conroy Legacy Award, was a finalist for the PEN/Robert W. Bingham Prize and the Edgar Allan Poe Award for Best Novel, and has been nominated for many more. A native of North Carolina, he is the Alumni Author-in-Residence at the University of North Carolina Asheville. He lives in Wilmington, NC with his wife, photographer Mallory Cash, and their two daughters.

“Mesmerizing . . . only Jess knows why his autistic older brother died on the very day he was taken into the church, and it’s his voice that we carry away from this intensely felt and beautifully told story.”
— New York Times Book Review

“Cash adeptly captures the rhythms of Appalachian speech, narrating his atmospheric novel in the voices of three characters . . . The story has elements of a thriller, but Cash is ultimately interested in how unscrupulous individuals can bend decent people to their own dark ends.”
— Washington Post

“Absorbing . . . Cash uses well-placed flashbacks to flesh out his characters . . . and to illuminate a familiar truth of Southern lit: Many are the ways that fathers fail their sons.”
— Entertainment Weekly

“As lyrical, beautiful, and uncomplicated as the classic ballads of Appalachia, Cash’s first novel is a tragic story of misplaced faith and love gone wrong . . . In a style reminiscent of Tom Franklin and John Hart, Cash captures the reader’s imagination.”
— Library Journal (starred review)

“This book will knock your socks off. It’s so good to read a first novel that sings with talent. Wiley Cash has a beautifully written hit on his hands.”
— Clyde Edgerton, author of The Night Train

“A riveting story! The writing is bold, daring, graceful, and engrossing.”
— Bobbie Ann Mason, author of In Country

“I try to state the truth and dislike flinging superlatives about with mad abandon, but I have been so deeply impressed by this novel that only superlatives can convey the tenor of my thought: this is one of the most powerful novels I have ever read.”
— Fred Chappell, author of Brighten the Corner Where You Are

“This novel has great cumulative power. Before I knew it I was grabbed by the ankle and pulled down into a full-blown Greek tragedy.”
— Gail Godwin, author of Evensong

“The first thing that struck me about Wiley’s novel is the beautiful prose: the narrative is strong, clean, direct and economical. . . . I think this could be the beginning of a long, fruitful career.”
— Ernest J. Gaines, author of A Lesson Before Dying

“Cash’s debut novel explores Faulkner-O’Connor country . . . As lean and spare as a mountain ballad, Cash’s novel resonates perfectly, so much so that it could easily have been expanded to epic proportions. An evocative work about love, fate and redemption.”
— Kirkus Reviews

“A Land More Kind Than Home is a powerfully moving debut that reads as if Cormac McCarthy decided to rewrite Harper Lee’s To Kill a Mockingbird.”
— Richmond Times-Dispatch

“A lyrical, poignant debut . . . In the mode of John Hart, Tom Franklin, and early Pat Conroy, A Land More Kind Than Home explores the power of forgiveness [and] the strength of family bonds.”
— Florida Sun-Sentinel

“So beautifully written that you’ll be torn about how fast to read it. This is great, gothic Southern fiction.”
— NPR