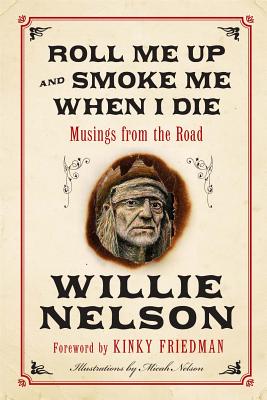 By Willie Nelson, Kinky Friedman
$22.99
Email or call for price.

In Roll Me Up and Smoke Me When I Die, Willie Nelson muses about his greatest influences and the things that are most important to him, and celebrates the family, friends, and colleagues who have blessed his remarkable journey. Willie riffs on everything, from music to poker, Texas to Nashville, and more. He shares the outlaw wisdom he has acquired over the course of eight decades, along with favorite jokes and insights from family, bandmates, and close friends. Rare family pictures, beautiful artwork created by his son, Micah Nelson, and lyrics to classic songs punctuate these charming and poignant memories.

A road journal written in Willie Nelson's inimitable, homespun voice and a fitting tribute to America’s greatest traveling bard, Roll Me Up and Smoke Me When I Die—introduced by another favorite son of Texas, Kinky Friedman—is a deeply personal look into the heart and soul of a unique man and one of the greatest artists of our time, a songwriter and performer whose legacy will endure for generations to come.

Willie Nelson is one of the most popular, prolific, and influential songwriters and singers in the history of American music. He has recorded more than one hundred albums over six decades, appeared in several films, and written two New York Times bestsellers: Willie: An Autobiography and The Facts of Life and Other Dirty Jokes.

Micah Nelson is a musician, visual artist, and videographer, and plays regularly with his father Willie Nelson.

Kinky Friedman is an author, musician, defender of strays, cigar smoker, and the governor of the heart of Texas.

“An irreverent, entertaining read. Humble, optimistic, and quick to give credit to those around him for contributing to his success, Nelson is a charming narrator.”
— Publishers Weekly

“Nelson takes us for a rollicking ride along the highways and byways of his long life and career in this rambunctious, hilarious, reflective, and loving memoir.”
— American Songwriter

“Compelling page-turner . . . for all his fame and accessibility, he still has so much wisdom left to share.”
— Jambands.com

“So many decades into his fabled life and career, Willie fans pretty much know what to expect from him. And he does not let his readers down with his Musings From the Road. ”
— Country Music Television, Nashville Skyline blog