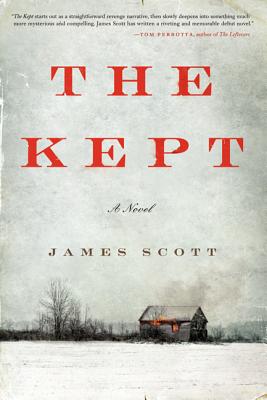 If you are a fan of creepy, country-noir fiction, you will love this book. In upstate New York in 1897, a woman who works as a midwife returns to her isolated home to discover her family viciously slaughtered. One child, Caleb, has survived by hiding, but accidentally shoots his mother and must nurse her back to health. The two then set off into the brutal winter countryside in search of the family’s killers. More violence ensues and secrets are revealed in a grim but beautiful narrative.

“It is a rare pleasure to read a novel that is written with such self-assuredness, balance, and grace as The Kept, but the fact that it is also a debut makes it all the more extraordinary. Elspeth and Caleb's troubled odyssey through rural upstate New York at the turn of the 20th century is both vivid and compelling, with the starkness of the setting matched only by the ruthless nature of the characters, all stunningly balanced with beautiful prose. Scott joins the pantheon of great American writers such as Cormac McCarthy and Flannery O'Connor in his understanding of the dichotomy of violence and beauty.”
— Emily Crowe, Odyssey Bookshop, South Hadley, MA

Set in rural New York state at the turn of the twentieth century, superb new talent James Scott makes his literary debut with The Kept—a propulsive novel reminiscent of the works of Michael Ondaatje, Cormac McCarthy, and Bonnie Jo Campbell, in which a mother and her young son embark on a quest to avenge a terrible and violent tragedy that has shattered their secluded family.

In the winter of 1897, a trio of killers descends upon an isolated farm in upstate New York. Midwife Elspeth Howell returns home to the carnage: her husband, and four of her children, murdered. Before she can discover her remaining son Caleb, alive and hiding in the kitchen pantry, another shot rings out over the snow-covered valley. Twelve-year-old Caleb must tend to his mother until she recovers enough for them to take to the frozen wilderness in search of the men responsible.

A scorching portrait of a merciless world—of guilt and lost innocence, atonement and retribution, resilience and sacrifice, pregnant obsession and primal adolescence—The Kept introduces an old-beyond-his-years protagonist as indelible and heartbreaking as Mattie Ross of True Grit or Jimmy Blevins of All the Pretty Horses, as well as a shape-shifting mother as enigmatic and mysterious as a character drawn by Russell Banks or Marilynne Robinson.

James Scott was born in Boston and grew up in upstate New York. He holds a BA from Middlebury College and an MFA from Emerson College. His fiction has appeared in Ploughshares, One Story, American Short Fiction, and other publications. He lives in western Massachusetts with his wife and dog. The Kept is his first novel.

“Scott is a master of mood… This landscape is more mythic than historic, and Scott’s characters are dark brush strokes of appetite and deceit. His central concern, as a storyteller, is the dynamic of consequence.”
— New York Times Book Review

“[A] bravura debut....It is a testament to the author’s artisan-like control that he is able to tease us with Elspeth’s crimes from the outset and yet keep the terrible measure of her dereliction at bay until the final clinch, as breathless as it is inevitable.”
— Boston Globe

“Graceful…unsettling…The Kept is a novel where most everyone harbors dark secrets and most characters are not who they appear to be.”
— USA Today

“Dark and mysterious… A novel whose daring is found in its bleakness… The plot unfolds with a weighty languor reminiscent of Cormac McCarthy… sparse, elegant… haunting.”
— New York Times

“Quite an impressive debut novel…James Scott’s descriptions of nature and his ability to reveal two complex, tormented people are what make the book live and even sing, albeit a mournful, heartbroken music.”
— Minneapolis Star Tribune

“The Kept starts out as a straightforward revenge narrative, then slowly deepens into something much more mysterious and compelling. James Scott has written a riveting and memorable debut novel.”
— Tom Perrotta, author of The Leftovers

“With its vivid sense of time and place, lyrical writing, and complex questions of what constitutes a family, The Kept is an outstanding debut by a bright new voice in American fiction.”
— Ron Rash, author of Nothing Gold Can Stay

“The Kept is a deeply moving, disconcerting novel… Scott manages something quite difficult here, balancing both terror and tenderness with apparent ease. By the end of the book, you’ll be convinced that he can do just about anything.”
— Kevin Wilson, author of The Family Fang

“The Kept is a brutal and beautiful novel. Written with emotional ascendancy, these rock-ribbed characters illuminate loss, desire, and love. James Scott’s debut is a celebration of bracing action, evocative rendering of the past, and literary precision.”
— Julianna Baggott, author of Girl Talk and Pure

“The Kept is both a thrilling adventure and a literary triumph. Following the journey of a mother and son who lose everything, only to find each other, James Scott’s haunting tale will astonish and enchant you, the words echoing long after the final pages have turned.”
— Hannah Tinti, author of The Good Thief

“What a gripping story teller James Scott is and what a dark and lyrical novel he has written. The Kept is a thrilling debut”
— Margot Livesey, author of The Flight of Gemma Hardy

“A work of historical fiction that is both atmospheric and memorable, suffused with dread and suspense right up to the last page.”
— Publishers Weekly (starred review)

“Scott is both compassionate moralist and master storyteller in this outstanding debut.”
— Kirkus Reviews (starred review)

“The author has crafted a laudable, compelling, tightly woven tale with memorable characters. Scott writes with an eloquence that urges the reader to return to passages and reread them just to admire his superb skill. Highly recommended.”
— Library Journal (starred review)

“Scott’s first novel epitomizes what’s great in this renaissance [of literary Westerns]: economy of dialogue; unsparing realism; the giddiness and terror induced by the knowledge of liberty.”
— Maclean's

“Half beautiful, half disturbing, [James Scott’s lyrical images] decorate The Kept like frescoes in a crumbling cathedral…Feels like the shell of a Cormac McCarthy novel filled with the intricate yearning and familial strife of a Lorca play…A gripping combination.”
— The Rumpus