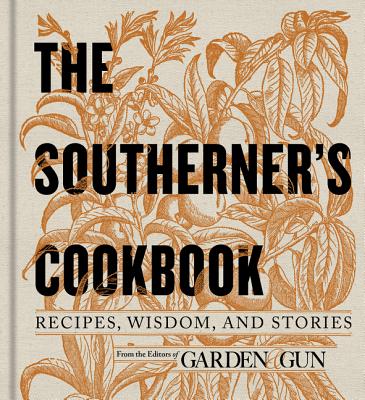 This is book number 3 in the Garden & Gun Books series.

I hesitate in calling this a cookbook as it's really more of a celebration of Southern culture with a few recipes thrown in. That said, it's a marvelous cookbook brimming with delicious dishes and info about the people and places that created them, or at least lay claim to. This dishes cam be complex at times, but it is definitely worth it.

From Garden & Gun—the magazine that features the best of Southern cooking, dining, cocktails, and customs—comes an heirloom-quality guide to the traditions and innovations that define today’s Southern food culture, with more than 100 recipes and 4-color photography throughout.

From well-loved classics like biscuits and fried chicken to uniquely regional dishes such as sonker (Piedmont, North Carolina’s take on cobbler) or Minorcan chowder (Florida’s version of clam chowder), each recipe in The Southerner’s Cookbook tells a story about Southern food and its origins. With contributions from some of the South’s finest chefs, a glossary of cooking terms, and essays from many of the magazine’s most beloved writers, The Southerner’s Cookbook is much more than simply a collection of recipes: it is a true reflection of the South’s culinary past, present, and future

Garden & Gun is a national magazine that covers the best of the South, including its sporting culture, food, music, art, and literature, and its people and their ideas. The magazine has won numerous awards for journalism, design, and overall excellence, and its two previous books, The Southerner's Handbook and Good Dog, were New York Times bestsellers.

“Who better than the folks at Garden and Gun to gather this new generation of Southern food culture in one lovely volume? The Southerner’s Cookbook offers traditional recipes, essays, and a full glossary of terms that might fly right by those of us who grew up elsewhere.”
— Edible Upcountry

“There are so, so many Southern cookbooks out there, but if you only have room for one, The Southerner’s Cookbook is a good call.”
— Epicurious

“Even if you didn’t grow up on the food, The Southerner’s Cookbook will make you long for a plate of fresh-from-the-fryer chicken, buttermilk biscuits, and vinegar-laced collards. [A]nd if you’re lucky enough to be from the South, these recipes might just make you homesick.”
— Tasting Table

“Every year, every cookbook season for the past decade, there’s been a steady stream of Southern cookbooks that parallels the national interest in the region. Now, the editors of the award-winning Garden & Gun magazine have published one of the smartest, most attractive Southern cookbooks yet.”
— The New Orleans Times-Picayune