My Conference Can Beat Your Conference: Why the SEC Still Rules College Football (Hardcover) 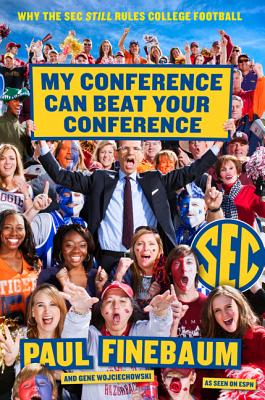 My Conference Can Beat Your Conference: Why the SEC Still Rules College Football (Hardcover)

An all-access pass into the powerhouse teams and passionate fanbases of the legendary Southeastern Conference, from one of the most influential men in college football: ESPN’s Paul Finebaum.

Proud owner of 14 prestigious college football programs, producing seven consecutive national championships, twelve NFL first round draft choices, and a budget that crushes the GDP of Samoa, the Southeastern Conference collects the most coveted ratings, rankings, and revenue of any conference in college football. With its pantheon of illustrious alumni like Bear Bryant, Herschel Walker, Peyton Manning, and Nick Saban, the SEC is the altar at which millions of Americans worship every Saturday, from Texas to Kentucky to Florida.

If the SEC is a religion, its deity is radio talk-show host Paul Finebaum. In My Conference Can Beat Your Conference, Finebaum, chronicles the rise of the SEC and his own unlikely path to college football fame. Finebaum offers his blunt wisdom on everything from Joe Paterno and the Penn State scandal to the relevancy of Alabama quarterback AJ McCarron’s girlfriend, and chronicles the best of his beloved callers, and the worst of his haters.

My Conference Can Beat Your Conference is illustrated with 8 pages of color photos.

Paul Finebaum is a college football analyst for ESPN and host of a daily national radio show heard on ESPN and SiriusXM and simulcast on the SEC Network.

Gene Wojciechowski is a columnist for ESPN.com, and a regular contributor to ESPN's College GameDay and ESPN's golf majors telecasts. He has authored or coauthored nine other books.