Welcome to Braggsville: A Novel (Hardcover) 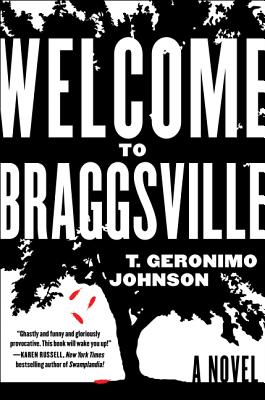 Welcome to Braggsville: A Novel (Hardcover)

“In Welcome to Braggsville, Johnson explores cultural, social, and regional diversity in a world increasingly driven by social media. His satirical and ironic style portrays a UC Berkeley -- 'Berzerkeley' -- student from Georgia who, along with his friends, goes back to his hometown to challenge an annual Southern tradition and inadvertently sets off a chain of events resulting in tragic consequences. Johnson's creative language play envelops the reader in the Deep South with the impact of a razor-sharp Lynyrd Skynyrd riff.”
— Jann Griffiths, Booksmart, Morgan Hill, CA

“Johnson’s timely novel is a tipsy social satire about race and the oh-so-fragile ties that bind disparate parts of this country into an imperfect and restless union. . . . A tour-de-force riff on black history.” —Maureen Corrigan, NPR'S FRESH AIR

From the PEN/Faulkner finalist and critically acclaimed author of Hold It ’Til It Hurts comes a dark and socially provocative Southern-fried comedy about four UC Berkeley students who stage a dramatic protest during a Civil War reenactment—a fierce, funny, tragic work from a bold new writer.

Welcome to Braggsville. The City that Love Built in the Heart of Georgia. Population 712

Born and raised in the heart of old Dixie, D’aron Davenport finds himself in unfamiliar territory his freshman year at UC Berkeley. Two thousand miles and a world away from his childhood, he is a small-town fish floundering in the depths of a large, hyper-liberal pond. Caught between the prosaic values of his rural hometown and the intellectualized multicultural cosmopolitanism of Berzerkeley, the nineteen-year-old white kid is uncertain about his place until one disastrous party brings him three idiosyncratic best friends: Louis, a “kung-fu comedian" from California; Candice, an earnest do-gooder claiming Native roots from Iowa; and Charlie, an introspective inner-city black teen from Chicago. They dub themselves the “4 Little Indians.”

But everything changes in the group’s alternative history class, when D’aron lets slip that his hometown hosts an annual Civil War reenactment, recently rebranded “Patriot Days.” His announcement is met with righteous indignation, and inspires Candice to suggest a “performative intervention” to protest the reenactment. Armed with youthful self-importance, makeshift slave costumes, righteous zeal, and their own misguided ideas about the South, the 4 Little Indians descend on Braggsville. Their journey through backwoods churches, backroom politics, Waffle Houses, and drunken family barbecues is uproarious to start, but will have devastating consequences.

With the keen wit of Billy Lynn’s Long Halftime Walk and the deft argot of The Brief Wondrous Life of Oscar Wao, T. Geronimo Johnson has written an astonishing, razor-sharp satire. Using a panoply of styles and tones, from tragicomic to Southern Gothic, he skewers issues of class, race, intellectual and political chauvinism, Obamaism, social media, and much more.

A literary coming-of-age novel for a new generation, written with tremendous social insight and a unique, generous heart, Welcome to Braggsville reminds us of the promise and perils of youthful exuberance, while painting an indelible portrait of contemporary America.

Born and raised in New Orleans, T. Geronimo Johnson is the bestselling author of Welcome to Braggsville and Hold It ’Til It Hurts, a finalist for the 2013 PEN/Faulkner Award for fiction. He received his M.F.A. from the Iowa Writers’ Workshop and his M.A. in language, literacy, and culture from UC Berkeley. He has taught writing and held fellowships—including a Stegner Fellowship and an Iowa Arts Fellowship—at Arizona State University, Iowa, Berkeley, Western Michigan University, and Stanford. He lives in Berkeley, California.

“A rollicking satire . . . Radical, hilarious, tragic, and all too relevant.” — O Magazine

“Johnson’s writing is often brilliantly comic, and Braggsville is a welcome new kind of southern novel.” — Time, Top 10 Books of 2015

“A stunning achievement with no clear literary precedent. Welcome to Braggsville . . . is one of the most searing, shocking looks at racial issues and campus activism in a long time.” — Men’s Journal, Best Books of 2015

“The most dazzling, most unsettling, most oh-my-God-listen-up novel you’ll read this year. T. Geronimo Johnson plays cultural criticism like it’s acid jazz. His shockingly funny story pricks every nerve of the American body politic. Welcome to Braggsville. It’s about time.” — The Washington Post

“Reading this novel is not unlike listening to an erudite satirist play the dozens in a marathon performance . . . Organic, plucky, smart, Welcome to Braggsville is the funniest sendup of identity politics, the academy and white racial anxiety to hit the scene in years.” — New York Times Book Review

“Audacious, unpredictable, exuberant and even tragic, in the most classic meaning of the word . . . A heady mix of satire and hyperbole. At times, Welcome to Braggsville reads like a literary hybrid of David Foster Wallace and Colson Whitehead.” — Los Angeles Times Book Review

“You must read T. Geronimo Johnson. He is awesome.” — Sherman Alexie via Twitter

“Ghastly and funny and gloriously provocative . . . Johnson’s prose is by turns scathing dark humor, soaring lyricism, and a quietly devastating analysis of every species of injustice. The result is a kind of mind-melting poetry—a linguistic electroconvulsive therapy for the reader. This book will wake you up!” — Karen Russell, bestselling author of Swamplandia!, finalist for the Pulitzer Prize

“Transcendence is what Geronimo Johnson achieves in this remarkable novel. Every racial assumption is both acknowledged and challenged in ways at times hilarious, at other times poignant. Welcome to Braggsville is ambitious, wise, and brave.” — Ron Rash, bestselling author of Serena

“As daring a literary high-wire act as has come along in some time. . . . frequently and unabashedly funny . . . [A] volatile mix of stinging satire, linguistic pyrotechnics and heartbreaking narrative.” — San Francisco Chronicle

“Full of virtuosic sentences and coruscating satire . . . a brilliant and necessary read.” — Buzzfeed, Best Books of 2015

“Biting, clever . . . Following four Berkeley students bent on a bit of guerrilla theater at a Civil War re-enactment in Georgia, Geronimo Johnson never runs out of targets for his satirical pen, from Old South apologists to solipsistic students in the grip of self-righteous political correctness.” — The Daily Beast, Best Fiction of 2015

Welcome to Braggsville is a comic, rollicking, and biting story about the cultural clash between the rural South and a bastion of contemporary politically sensitive liberalism.” — Christian Science Monitor

“Both funny and frightful . . . But as 21st-century American culture crisscrosses with the nation’s history, Johnson’s story evokes more than satirical humor. A sense of conscience and moral purpose takes shape at the heart of the book.” — Associated Press

“Stunning and poignant . . . Johnson’s novel may not have the answer to the problems he’s addressing, [but] it’s clear that he’s asking the right questions.” — LA Review of Books

“Geronimo Johnson is a fearless and driven young writer of dazzling gifts. His books map American multiculture as a poignant and twisted human comedy in which nobody comes out clean. . . . surprising, heartbreaking, tragicomic, and deeply disturbing.” — Jaimy Gordon, National Book Award-winning author of Lord of Misrule

“One of the most invigorating and least predictable novels of the year.” — Kevin Brockmeier, award-winning author of The Brief History of the Dead

“Combines the intellectual urgency of a satire with the emotional resonance of a tragedy. Welcome to Braggsville is as smart as it is subversive, and as bleakly hilarious as it is deeply necessary.” — Jennifer duBois, award-winning author of A Partial History of Lost Causes

“DeLilloesque for its orgiastic pop-culture roiling. This is a virtuoso performance by one of our strongest new voices.” — Richard Katrovas, award-winning poet and author of Scorpio Rising

“Madcap, satirical, sometimes profane and uncanny . . . Welcome to Braggsville is a deeply pleasurable read for the sheer wonder of Johnson’s prose, but a deeply disturbing read for the truth it reveals about us.” — BookPage

“Brilliant, wildly satirical, and also deeply sobering. The story looms larger than life. At every turn, the impasses Johnson shows us are our own.” — Tess Taylor, award-winning poet and author of The Forage House