The Heir (The Selection #4) (Paperback) 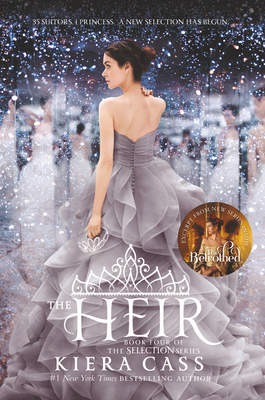 The Heir (The Selection #4) (Paperback)

This is book number 4 in the The Selection series.

America and Maxon’s fairy-tale romance enchanted readers from the very first page of The Selection. Now find out what happens after happily ever after in this fourth captivating novel, perfect for fans of Veronica Roth’s Divergent, Lauren Oliver’s Delirium, or Renée Ahdieh’s The Wrath & the Dawn.

Twenty years ago, America Singer entered the Selection and won Prince Maxon’s heart. Now the time has come for Princess Eadlyn to hold a Selection of her own. Eadlyn doesn’t expect anything like her parents’ fairy-tale love story...but as the competition begins, she may discover that finding her own happily ever after isn’t as impossible as she’s always thought.

A new generation of swoon-worthy characters and captivating romance awaits in the fourth book of the Selection series!

Don’t miss The Betrothed, a glittering royal romance sure to captivate Kiera Cass’s legion of loyal readers and lovers of courtly intrigue alike!

Kiera Cass is the #1 New York Times bestselling author of the Selection series and The Siren. She is a wife and mom and too many other things to list. If she could make a crown out of anything, it would be the unending tears of her readers. You can learn more about Kiera and her books at www.kieracass.com.

PRAISE FOR KIERA CASS: “A real page-turner. Romance, royalty, and revolution in a reality-show format serve Cass’ boldly rendered heroine well in her quest for justice and love.” — ALA Booklist

“An engrossing tale reminiscent of Shannon Hale’s Princess Academy and Ally Condie’s Matched. Fairy-tale lovers will lose themselves in America’s alternate reality and wish that the next glamorous sequel were waiting for them.” — School Library Journal

“Cass’s immensely readable debut novel is a less drastic Hunger Games, with elaborate fashion and trappings. The fast-paced action will have readers gasping for the upcoming sequel.” — ALA Booklist