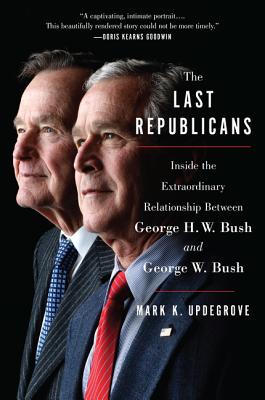 A groundbreaking look at the lives of George H. W. Bush and George W. Bush, the most consequential father-son pair in American history, often in their own words.

Drawing extensively on exclusive access and interviews with both Bush presidents, Updegrove reveals for the first time their influences and perspectives on each other’s presidencies; their views on family, public service, and America’s role in the world; and their unvarnished thoughts on Donald Trump and the radical transformation of the Republican Party he now leads.

In 2016 George W. Bush lamented privately that he might be “the last Republican president.” Donald Trump’s election marked the end not only to the Bushes’ hold on the White House, but of a rejection of the Republican principles of civility and international engagement and leadership that the Bushes have long championed.

The Last Republicans offers illuminating, moving portraits of the forty-first and forty-third presidents, as well as an elegy for the Republican “establishment,” which once stood for putting the interests of the nation over those of any single man.

Mark K. Updegrove is the author of four books on the presidency, including Indomitable Will: LBJ in the Presidency. The inaugural CEO of the National Medal of Honor Museum and the former director of the LBJ Presidential Library, Updegrove is a contributor to ABC News and Good Morning America, and has written for the Daily Beast, National Geographic, the New York Times, Parade, Politico, Texas Monthly and Time. He lives in Austin, Texas.

“In his lively and engaging portrait of the two presidents Bush, Mark Updegrove has painted a compelling picture of political leadership in America. This isn’t just a work of history. It invites us to think about the leadership this country needs and deserves today.”
— William Kristol, former editor, The Weekly Standard

“This is more than just a fascinating inside story of the relationship of George H. W. Bush and George W. Bush, and Mark Updegrove gives us plenty of insight on that. But at a time when American politics is in turmoil, Updegrove traces the great changes that the Republican Party has undergone from the kinder, gentler Bush days and raises a question pertinent to Americans across the political spectrum: Is the party they presided over gone forever, replaced by something not yet defined.”
— Bob Schieffer

“Mark Updegrove untangles one of the most fascinating and consequential relationships in the history of the American presidency. From the end of the Cold War through 9/11, the Bush father and son shaped the world we live in, and with this dual biography we can better understand how and why.”
— Lawrence Wright

“With unique access to the only father and son to serve as presidents in almost two hundred years, Mark Updegrove weaves a captivating, intimate portrait of one of the country’s most important political dynasties. The Bushes’ sense of public service as a high calling becomes all the more striking against the backdrop of today’s polarized party politics. This beautifully rendered story could not be more timely.”
— Doris Kearns Goodwin

"The first book ever written with [the Bushes'] cooperation about their relationship....The Last Republicans chronicles an era almost dated in today's reality show politics, when the Republican establishment controlled the party and Washington, and when a single family could occupy the presidency and vice presidency for a combined twenty years."
— New York Times

"This is a very good book, an honest and clear-eyed look at a controversial and conflicted family. Mr. Updegrove is a first-rate historian and The Last Republicans is a worthy, straightforward, and honest addition to the Bush legacy and Bush family history."
— Washington Times