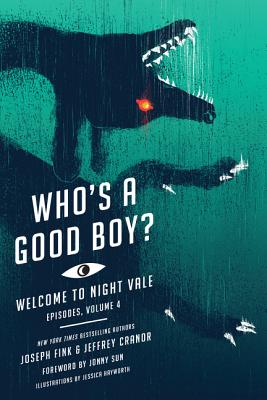 This is book number 4 in the Welcome to Night Vale Episodes series.

From the authors of the New York Times bestselling novels It Devours! and Welcome to Night Vale and the creators of the #1 international podcast of the same name, comes a collection of episodes from Season Four of their hit podcast, featuring an introduction by the authors, a foreword by Jonny Sun, behind-the-scenes commentary, and original illustrations.

In June of 2012, the creators of Welcome to Night Vale began airing twice-monthly podcasts. Their hopes were that they could reach people outside their close circles. What they didn’t know was that a year after the first show aired, the fanbase had far exceeded their expectations, launching the podcast into the #1 spot on iTunes. Over the years, its popularity has surged by mega proportions, hitting more than 100 million downloads, and Night Vale has expanded to a successful live multi-cast international touring stage show and two New York Times bestselling novels (Welcome to Night Vale and It Devours!), and a new podcast network Night Vale Presents.

Now with Who’s a Good Boy? Season Four of the podcast is available in book form, offering a valuable reference guide to past episodes. Featuring a foreword by twitter personality and highly regarded author Jonny Sun, original introductions by Joseph Fink and Jeffrey Cranor, fascinating behind-the-scenes commentary by cast members and supporters, and gorgeous illustrations by series artist Jessica Hayworth accompanying each episode, this book will thrill fans of the podcast and those new to the amazing universe of Night Vale.

Praise for It Devours! “It Devours! is different from other mystery novels. It is as captivating and light as any mystery novel can be but explores one of the most complex issues: the conflict between science and reason on the one hand and, on the other hand, religion and cult.”

“[A] smart exploration of the divide—and overlap—of science and religion. . ..  a thrilling adventure and a fascinating argument that science and belief aren’t necessarily mutually exclusive.”

Praise for Welcome to Night Vale: “This is a splendid, weird, moving novel…It manages beautifully that trick of embracing the surreal in order to underscore and emphasize the real - not as allegory, but as affirmation of emotional truths that don’t conform to the neat and tidy boxes in which we’re encouraged to house them.”
— NPR.org

“Welcome to Night Vale lives up to the podcast hype in every way. It is a singularly inventive visit to an otherworldly town that’s the stuff of nightmares and daydreams.”
— BookPage

“If you like your stories creepy and soothing at the same time, you’ll love Welcome to Night Vale.”
— Mashable

“Defining its own corner of the dark comedy universe since it started in 2012, Welcome to Night Vale is a peek into the goings-on of a typical American small town if that burg had been co-conceived by H.P. Lovecraft, Philip K. Dick, Ayn Rand, and whomever else would come up with a dystopian present.”
— Vulture

“Welcome to Night Vale is a bit like Twin Peaks if it were a podcast — with menacing glow clouds and monstrous mayors.”
— Digital Trends

“Each episode acts as a news broadcast of sorts from a small desert town named Night Vale, and they’re more horror/dark humor than sci-fi, really. The broadcasts are spooky, absurd, and, well, funny. That’s a hard tightrope to walk.”
— Mashable

“One of the OG pioneers in podcasting fictional drama...”
— Bustle