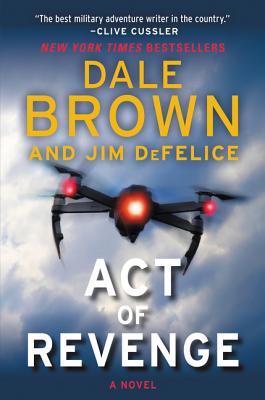 This is book number 2 in the Puppetmaster series.

When terrorists attack Boston, Louis Massina races against time to save the city with a high-tech counteroffensive . . .

On Easter Sunday morning, the city of Boston is struck by a widespread and coordinated series of terrorist attacks: an explosion in the T, a suicide bomber at Back Bay Police Station, and heavily armed gunmen taking hostages at the Patriot Hotel.

For robotics innovator Louis Massina, aka the Puppet Master, this is far more personal than a savage act of political terrorism. Boston is his city—and one of his employees, Chelsea Goodman, is among the hostages facing certain death. As Chelsea fights from the inside, Massina leads his team of tech geniuses at Smart Metal to deploy every bot, drone, and cyber weapon at their disposal to defeat the fanatics and save his city and friend.

That's step one. Step two: Find the twisted mastermind behind the attacks and make him pay.

Dale Brown is the New York Times bestselling author of numerous books, from Flight of the Old Dog (1987) to, most recently, Eagle Station (2020). A former U.S. Air Force captain, he can often be found flying his own plane in the skies of the United States. He lives near Lake Tahoe, Nevada.

Jim DeFelice is the co-author, with former U.S. Navy SEAL Chris Kyle, of the multi-million-copy bestseller American Sniper, the source for Clint Eastwood’s film starring Bradley Cooper. His other books include Omar Bradley: General at War; Rangers at Dieppe; and West Like Lightning: The Brief, Legendary Ride of the Pony Express. He lives in upstate New York.