In Search of a Kingdom: Francis Drake, Elizabeth I, and the Perilous Birth of the British Empire (Hardcover) 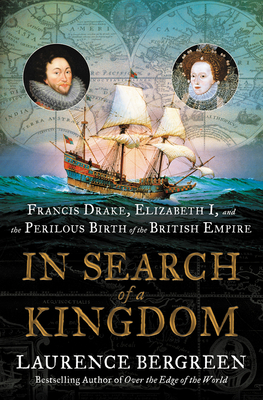 In Search of a Kingdom: Francis Drake, Elizabeth I, and the Perilous Birth of the British Empire (Hardcover)

The place of Francis Drake in English maritime lore can only be approached by Horatio Nelson. Drake's circumnavigation is one of the greatest feats in sailing history and his leading role in the defense of England during the attack of the Spanish Armada is part of legend. The consequences of the actions of Queen Elizabeth's personal pirate went far beyond such actions. The depredations Drake performed upon Spanish treasure ships did much to boost English economy and start a change in the balance of power in Europe and the nautical pathways he opened paved a pathway for the start of the British Empire. Displaying the same deep research and verve for story that he showed in an earlier book about Magellan, Bergreen has produced an informative, yet entertaining, history of an era that did much to provide the basis for our modern world.

In this grand and thrilling narrative, the acclaimed biographer of Magellan and Columbus reveals the singular adventures of Sir Francis Drake, whose mastery of the seas during the reign of Queen Elizabeth I changed the course of history.

Before he was secretly dispatched by Queen Elizabeth to circumnavigate the globe, or was called upon to save England from the Spanish Armada, Francis Drake was perhaps the most wanted—and successful—pirate ever to sail. Nicknamed “El Draque” by the Spaniards who placed a bounty on his head, the notorious red-haired, hot-tempered Drake pillaged galleons laden with New World gold and silver, stealing a vast fortune for his queen—and himself. For Elizabeth, Drake made the impossible real, serving as a crucial and brilliantly adaptable instrument of her ambitions to transform England from a third-rate island kingdom into a global imperial power.

The relationship between Drake and Elizabeth is the missing link in our understanding of the rise of the British Empire, and its importance has not been fully described or appreciated. Framed around Drake’s key voyages as a window into this crucial moment in British history, In Search of a Kingdom is a rousing adventure narrative entwining epic historical themes with intimate passions.

LAURENCE BERGREEN is the bestselling author of Over the Edge of the World: Magellan’s Terrifying Circumnavigation of the Globe. His other books include Columbus: The Four Voyages, 1492–1504; Marco Polo: From Venice to Xanadu; and Voyage to Mars: NASA’s Search for Life Beyond Earth. A graduate of Harvard, Bergreen lives in Manhattan.

“A dramatic tale of discovery. ... A comprehensive look at Drake, in all his contradictions. ... A lively and compelling history of a man whose blend of audacity, piety and cruelty changed the world.” — San Francisco Chronicle

“Vivid. … Entrancing. ... The accounts of Drake’s circumnavigation and his subsequent naval career are very good indeed. They will surely delight aficionados of imperial history and anyone keen on real-life adventure stories.” — Wall Street Journal

"With a keen sense of adventure and a sharp grasp of personalities on sea and land, Bergreen details Drake’s round-the-world adventures as well as political intrigues and mutinous sailors." — Booklist (starred review)

“The swashbuckling life and times of the explorer who achieved what Magellan could not—and made England’s fortune in the process. ... Demonstrating his deep knowledge of the era, the author energetically recounts Drake’s action-packed journey. ... Bergreen masterly portrays the principal characters in this drama. … A smooth, dramatic, and well-fleshed world history.” — Kirkus Reviews (starred review)

“The great pleasure of In Search of a Kingdom is the revelation of Drake as a man of apparent contradictions that helped rather than hindered his ambitions. Readers in search of a story of how a clergyman’s son gained the support of a queen and helped found the British Empire will not be disappointed.” — Washington Independent Review of Books

“Laurence Bergreen’s new book tells the swashbuckling tale of Sir Francis Drake. … Drake’s trip around the globe, which Bergreen describes in great and fascinating detail, was truly a marvel. … The account of Drake’s remarkable trip and Bergreen’s parsing of this complicated character will repay the time of readers who choose to take this 400-page trip.”  — American Spectator