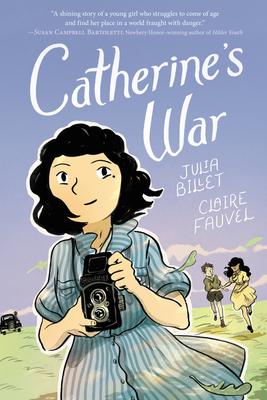 “This story of everyday courage highlights the life of a Jewish teen in occupied France. Rachel Cohen must change her name to Catherine Colin and go into hiding. As she moves from safe house to safe house, she captures her journey in photographs as a way to hang on to her identity and her hopes for the future. I was so moved by Rachel’s story, which is largely based on the life of the author’s mother. This is an excellent graphic novel for middle grade (and beyond!) readers who want to learn more about resistance and preserving history on the home front.”
— Julia Steiner, The Book Cellar (IL), Chicago, IL

“A shining story of a young girl who struggles to come of age and find her place in a world fraught with danger.” —Susan Campbell Bartoletti, Newbery Honor-winning author of Hitler Youth

A magnificent narrative inspired by a true survival story that asks universal questions about a young girl’s coming of age story, her identity, her passions, and her first loves.

At the Sèvres Children’s Home outside Paris, Rachel Cohen has discovered her passion—photography. Although she hasn’t heard from her parents in months, she loves the people at her school, adores capturing what she sees in pictures, and tries not to worry too much about Hitler’s war. But as France buckles under the Nazi regime, danger closes in, and Rachel must change her name and go into hiding.

As Catherine Colin, Rachel Cohen is faced with leaving the Sèvres Home—and the friends she made there—behind. But with her beautiful camera, Catherine possesses an object with the power to remember. For the rest of the war, Catherine bears witness to her own journey, and to the countless heroes whose courage and generosity saved the lives of many, including her own.

Based on the author’s mother’s own experiences as a hidden child in France during World War II, Catherine’s War is one of the most accessible historical graphic novels featuring a powerful girl since Persepolis by Marjane Satrapi—perfect for fans of Markus Zusak’s The Book Thief, Anne Frank, or Helen Keller.

Includes a map and photographs of the real Catherine and her wartime experiences, as well as an interview with author Julia Billet.

“Many of the settings are beautifully detailed, and the characters undeniably expressive. Catherine’s ability to find beauty in the world makes for a forward-looking read.” —Booklist *(starred review)*

“This story will make readers want to join the Resistance. Characters are drawn so vividly that, long afterward, readers will remember their names.” —Kirkus

Julia Billet is an acclaimed French novelist and author of short stories, children's books, and poetry. Her award-winning La Guerre de Catherine (Rue de Sèvres, 2012) was published in the United States as Catherine’s War in January 2020.

Claire Fauvel studied illustration and animation at school in France (Gobelins, L'École de L'Image). Claire worked one year as a background artist in animation then decided to tell her own stories as a comic book artist. Now Claire works both as an author and illustrator. La Guerre de Catherine (Catherine's War) is her first title with Rue de Sèvres.

“Many of the settings are beautifully detailed…and the characters undeniably expressive. Catherine’s ability to find beauty in the world makes for a forward-looking read.” — Booklist (starred review)

”Billet has crafted a pictorial paean to the everyday heroes of Vichy France, as seen through the eyes—and camera lens—of a Jewish teen...Almost every panel—especially those inspired by real photographs—could stand alone as a work of art...Fauvel’s ink and watercolor illustrations are masterly.” — School Library Journal (starred review)

“This story will make readers want to join the Resistance…Characters are drawn so vividly that, long afterward, readers will remember their names.”
— Kirkus Reviews

“Though the story covers Rachel/Catherine’s adolescence, the smoothly translated text is clear...and gentle enough...to be comprehensible to readers younger than the character. The back matter is pitched to explain this story’s context to young people with little or no background knowledge about WWII or the Holocaust.” — Horn Book Magazine