Peanut Goes for the Gold (Hardcover) 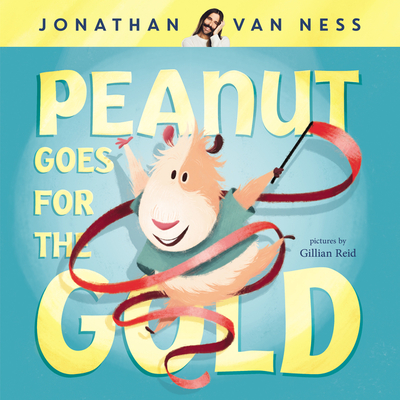 Peanut Goes for the Gold (Hardcover)

Jonathan Van Ness, the star of Netflix’s hit show Queer Eye, brings his signature humor and positivity to his empowering first picture book, inspiring readers of all ages to love being exactly who they are.

Peanut Goes for the Gold is a charming, funny, and heartfelt picture book that follows the adventures of Peanut, a gender nonbinary guinea pig who does everything with their own personal flare.

Peanut just has their own unique way of doing things. Whether it’s cartwheeling during basketball practice or cutting their own hair, this little guinea pig puts their own special twist on life. So when Peanut decides to be a rhythmic gymnast, they come up with a routine that they know is absolutely perfect, because it is absolutely, one hundred percent Peanut.

This upbeat and hilarious picture book, inspired by Jonathan’s own childhood guinea pig, encourages children to not just be themselves—but to boldly and unapologetically love being themselves.

Jonathan Van Ness brings his signature message of warmth, positivity, and self-love to this boldly original picture book that celebrates the joys of being true to yourself and the magic that comes from following your dreams.

Jonathan Van Ness is a bestselling author, podcaster, comedian, and television personality. He is known for his work as the beauty expert on the Netflix series Queer Eye, for hosting the Getting Curious with Jonathan Van Ness podcast, and for the web series parody Gay of Thrones.

Gillian Reid is an illustrator of books, a character designer of animated shows, and a professor of life drawing. Originally from the United Kingdom, she now lives in Canada with her partner and two cats. She loves to draw, watch movies, and do yoga. Visit her at www.gillian-reid.com.

Praise for "Over the Top": "There is plenty to laugh at in the ways “Queer Eye”’s grooming expert frames his story, but it’s the battles he’s waged against the darker corners of his soul to become the bright light we know today that provide the necessary context for this book to shine."
— New York Times