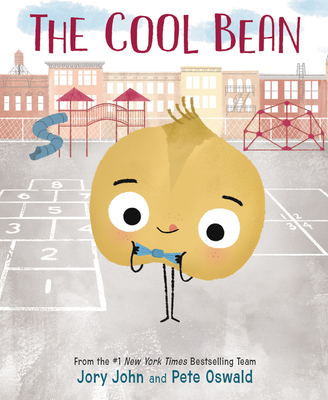 The “too-cool-for-school” third picture book from the #1 New York Times bestselling creators of The Bad Seed and The Good Egg, Jory John and Pete Oswald

Always on the sidelines, one bean unsuccessfully tries everything he can to fit in with the crowd—until one day the cool beans show him how it’s done.

With equal measures of humor, wit, and charm, the #1 New York Times bestselling duo Jory John and Pete Oswald craft another incredible picture book, reminding us that it’s cooler to be kind.

Check out Jory John and Pete Oswald’s funny, bestselling books for kids 4-8 and anyone who wants a laugh:

Jory John is a New York Times bestselling author and two-time E. B. White Read Aloud Honor recipient. Jory’s work includes the award-winning Goodnight Already! series; the bestselling Terrible Two series; the popular picture books The Bad Seed, Penguin Problems, and Quit Calling Me a Monster!; and the national bestseller All My Friends Are Dead, among other books. He lives in Oregon. You can visit him online at www.joryjohn.com.

Pete Oswald is an LA-based artist, kid lit author/illustrator, and production designer. He is the co-creator of Mingo the Flamingo, published in 2017 by HarperCollins. Pete is also the illustrator of The Bad Seed, by Jory John. When Pete is not working on books he is helping to uplift many of the most successful animated franchises as a character designer, concept artist, and production designer. Pete lives in Santa Monica, California, with his wife and two sons.

This is a gentle, sweet story of how generosity and kindness are the true qualities to champion, and offers a great example for young readers and an important reminder for older readers. A strong addition to any collection. — School Library Journal (starred review)

Witty wordplay (“I was officially a has-bean”) and silly gags in the digital and watercolor illustrations (The Great Gatsbean, A Midsummer Night’s Bean, Leguma Beach) help downplay the didacticism and up the cool factor. — Horn Book Magazine

as character-driven, pun-filled, and hilariously illustrated as its predecessors. — Booklist

The last line [drives] the message home: all kids can be cool if they’re kind. — Booklist