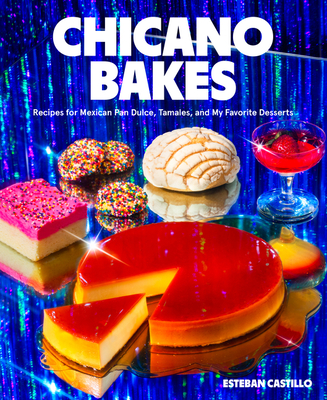 In this companion cookbook to Chicano Eats, the blogger, and winner of the Saveur Best New Voice People’s Choice Award shows off the sweet and dreamy side of Chicano cuisine in 80 recipes for irresistible desserts, cakes, tamales, pan dulce and drinks.

With Chicano Eats: Recipes from My Mexican American Kitchen, Esteban Castillo offered his readers a look into his life, family, and culture. For Esteban, sharing stories and recipes from his childhood was a cathartic experience, and seeing so many people make and enjoy the foods that meant so much to him growing up was a dream come true.

Now, this rising food star mines his culinary roots once more. Chicano Bakes features many of the mouthwatering delights Esteban enjoyed throughout his childhood, from Pan Dulce Mexicano (Mexican Sweet Bread), Postres (Desserts), and Pasteles (Cakes) to Antojitos (Bites) and Bebidas (Drinks). Here are easy-to-make recipes sure to become fan favorites, including:

Esteban encourages everyone—no matter their level of experience in the kitchen—to get baking, especially those in his community who may be intimidated or discouraged by other cookbooks that overlook their cultural tastes and traditions. Illustrated with more than 100 bright and inviting photographs that capture the flavor of the Chicano Eats brand, Chicano Bakes is an homage to a culture that has existed in the U.S. for generations—and whose influence continues to grow.

Esteban Castillo is a PR/Digital Marketing professional and the creator of Chicano Eats, a blog that showcases fun and exciting dishes that take influences and ingredients of traditional Mexican food combined with concepts and flavors from his life in California. He is the Reader’s Choice winner of the 2017 Saveur Blog Awards for Best New Voice, and Chicano Eats has been featured in Food52, NPR’s the Salt, Instagram, Remezcla, and We Are Mitú, among others.

"Castillo’s prose is straightforward as he reflects on family traditions, memories in the kitchen, and cultural tidbits, as in the recipe for café de olla, which is a 'coffee that is traditionally made in an olla de barro (clay pot) with aromatics like cinnamon, orange peel, and cloves.' This is perfect for home bakers looking to broaden their palates." — Publishers Weekly

"I was giddy when I saw that the blogger and author of Chicano Eats was working on a baking book. Sometimes prayers are answered. Esteban covers Conchas; Sweet pecan loaf; Mexican wedding cookies; Pan de Muerto; and Horchata tiramisu along with countless other breads, muffins, cookies and cakes. Measurements in weight and volume." — Eat Your Books

"CHECK OUT THIS COVER I am in love. The recipes in Chicano Bakes from Esteban Castillo is perhaps a bit more classic [...] and the art design is super fresh and fun. Get your recipes for Pan Dulce, Dulce de Leche, Flan, Marranitos, Cortadillo and more, all with a rainbow-glitter-disco flair." — Stained Page News

"Chicano Bakes is the second cookbook from Esteban Castillo, who embraces the sweets of his childhood with recipes for every skill level." — KCRW's Good Food