The Coming China Wars: Where They Will Be Fought and How They Can Be Won, Revised and Expanded Edition (Paperback) 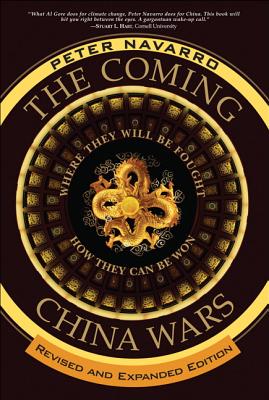 The Coming China Wars: Where They Will Be Fought and How They Can Be Won, Revised and Expanded Edition (Paperback)


Usually Arrives in Store in 1-5 Days
For years, China has served as the factory floor for global production, driving down prices for consumers worldwide. But, unfortunately, China's rapid and chaotic industrialization has put it on a collision course with the rest of the world. The Coming China Wars was the first book to systematically cover all those conflicts: political, economic, and environmental. Now, in this new edition, Dr. Peter Navarro has thoroughly updated the entire book. You'll find new chapters on the danger posed by China's flood of defective products and contaminated food; China's dramatic military expansion and the rising threat of a hot war; China's space program and its profound strategic implications; China's growing suppression of human rights and free speech; and much more. The coming China Wars will be fought over everything from decent jobs, livable wages, and advanced technologies to strategic resources...and eventually to our most basic of all needs: bread, water, and air. Unless all nations immediately address these impending conflicts, the results may be catastrophic. Like the First Edition, this book demands that we think much more deeply about how to stop the coming China Wars, laying out hard choices that must be made sooner rather than later. This new edition offers even more policy recommendations, including original contributions from several of the world's most important China experts.
Peter Navarro is a business professor at the University of California-Irvine and author of the bestselling investment book If It's Raining in Brazil, Buy Starbucks and the path-breaking management book The Well-Timed Strategy. Professor Navarro is a widely sought-after and gifted public speaker and a regular CNBC contributor. Before joining CNBC, he appeared frequently on Bloomberg TV and radio, CNN, and NPR, as well as on all three major network news shows. Professor Navarro's unique and internationally recognized expertise lies in his "big picture" application of a highly sophisticated but easily accessible macroeconomic analysis of the business environment and financial markets for consumers, investors, and corporate executives. His articles have appeared in a wide range of publications, from Business Week, the Los Angeles Times, the New York Times, the Washington Post, and the Wall Street Journal to the Harvard Business Review, the Sloan Management Review, and the Journal of Business. Professor Navarro's free weekly investment newsletter is published at www.peternavarro.com. His video series, The China Effect, appears on YouTube at www.youtube.com/comingchinawars.