In Defense of Food: An Eater's Manifesto (Paperback) 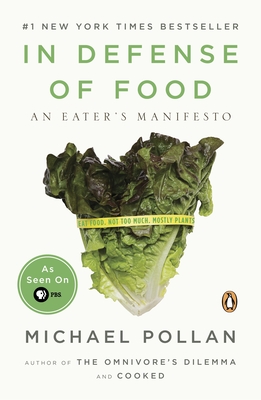 In Defense of Food: An Eater's Manifesto (Paperback)


Usually Arrives in Store in 1-5 Days
#1 New York Times Bestseller from the author of How to Change Your Mind, The Omnivore's Dilemma, and Food Rules

Food. There's plenty of it around, and we all love to eat it. So why should anyone need to defend it?

Because in the so-called Western diet, food has been replaced by nutrients, and common sense by confusion--most of what we’re consuming today is longer the product of nature but of food science. The result is what Michael Pollan calls the American Paradox: The more we worry about nutrition, the less healthy we see to become. With In Defense of Food, Pollan proposes a new (and very old) answer to the question of what we should eat that comes down to seven simple but liberating words: "Eat food. Not too much. Mostly plants." Pollan’s bracing and eloquent manifesto shows us how we can start making thoughtful food choices that will enrich our lives, enlarge our sense of what it means to be healthy, and bring pleasure back to eating.

Michael Pollan is the author of seven previous books, including Cooked, Food Rules, In Defense of Food, The Omnivore's Dilemma and The Botany of Desire, all of which were New York Times bestsellers. He's also the author of the audiobook Caffeine: How Caffeine Created the Modern World. A longtime contributor to the New York Times Magazine, he also teaches writing at Harvard and the University of California, Berkeley. In 2010, TIME magazine named him one of the one hundred most influential people in the world.

"In this slim, remarkable volume, Pollan builds a convincing case not only against that steak dinner but against the entire Western diet." —The Washington Post

"A tough, witty, cogent rebuttal to the proposition that food can be reduced to its nutritional components without the loss of something essential . . . [a] lively, invaluable book." —Janet Maslin, The New York Times

"What should I eat for dinner tonight? Here is Pollan's brilliant, succinct and nuanced answer to this question: 'Eat food. Not too much. Mostly plants.'" —Pittsburgh Post-Gazette

"In Defense of Food is written with Pollan's customary bite, ringing clarity and brilliance at connecting the dots." —The Seattle Times

"This is an important book, short but pithy, and, like the word 'food,' not simple at all." —New York Post

"With his lucid style and innovative research, Pollan deserves his reputation as one of the most respectable voices in the modern debate about food." —The Financial Times