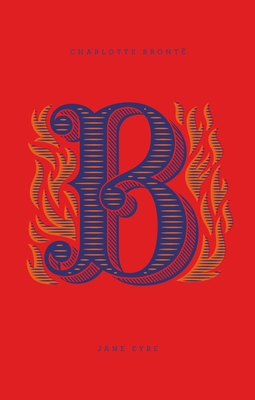 It all begins with a letter. Fall in love with Penguin Drop Caps, a new series of twenty-six collectible and gift-worthy hardcover editions, each with a type cover showcasing a gorgeously illustrated letter of the alphabet by superstar type designer Jessica Hische, whose work has appeared everywhere from Tiffany & Co. to Wes Anderson's film Moonrise Kingdom to Penguin's own bestsellers Committedand Rules of Civility. A collaboration between Jessica Hische and Penguin Art Director Paul Buckley,  the series design encompasses foil-stamped paper-over-board cases in a rainbow-hued spectrum across all twenty-six book spines and a decorative stain on all three paper edges. Penguin Drop Caps debuts with an “A” for Jane Austen’s Pride and Prejudice, a “B” for Charlotte Brontë’s Jane Eyre, and a “C” for Willa Cather’s My Ántonia, and continues with more classics from Penguin.

B is for Brontë. A novel of intense power and intrigue, Jane Eyre dazzles and shocks readers with its passionate depiction of a woman's search for equality and freedom. Orphaned Jane Eyre grows up in the home of her heartless aunt, where she endures loneliness and cruelty, and at a charity school with a harsh regime. This troubled childhood strengthens Jane's natural independence and spirit—which proves necessary when she takes a position as governess at Thornfield Hall. But when she finds love with her sardonic employer, Rochester, the discovery of his terrible secret forces her to make a choice. Should she stay with him and live with the consequences, or follow her convictions, even if it means leaving the man she loves?

Charlotte Brontë (1816–1855) was the third of six children, and the eldest to survive into adulthood. Like her talented sisters Anne and Emily, Charlotte published poetry and prose under a pseudonym. She is distinguished as the first English woman novelist to be the subject of a full-length biography, in 1857.Jessica Hische is a letterer, an illustrator, a typographer, and a web designer. She currently serves on the Type Directors Club board of directors, has been named a Forbes magazine “30 under 30” in art and design. She lives in San Francisco, California, and Brooklyn, New York.

Winner of the 2012 Fifty Books/Fifty Covers show, organized by Design Observer in association with AIGA and Designers & Books