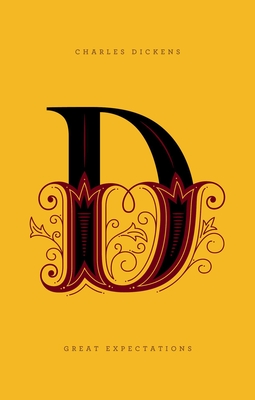 It all begins with a letter. Fall in love with Penguin Drop Caps, a new series of twenty-six collectible and gift-worthy hardcover editions, each with a type cover showcasing a gorgeously illustrated letter of the alphabet by superstar type designer Jessica Hische, whose work has appeared everywhere from Tiffany & Co. to Wes Anderson's film Moonrise Kingdom to Penguin's own bestsellers Committed and Rules of Civility. A collaboration between Jessica Hische and Penguin Art Director Paul Buckley,  the series design encompasses foil-stamped paper-over-board cases in a rainbow-hued spectrum across all twenty-six book spines and a decorative stain on all three paper edges. Penguin Drop Caps debuts with an “A” for Jane Austen’s Pride and Prejudice, a “B” for Charlotte Brontë’s Jane Eyre, and a “C” for Willa Cather’s My Ántonia, and continues with more classics from Penguin.

D is for Dickens. The orphan Pip is destined to become a blacksmith like his brother-in-law Joe. But when Pip meets the beautiful Estella Havisham, he yearns for a gentleman’s education in order to woo her. A mysterious legacy answers his ambition, and changes the course of his life, taking him far from the Marshes of youth—far, so he thinks, from his early terrifying encounter with an escaped convict, and his sister’s class resentments. In this fictional autobiography, Pip’s coming-of-age story becomes representative of the changing social landscape of nineteenth-century England. As Pip’s education provides upward social mobility, he must also learn hard lessons about self-delusion and forgiveness, love and loss, and the true nature of his Great Expectations.
CHARLES DICKENS was born at Portsmouth on 7 February 1812, the second of eight children. Dickens's childhood experiences were similar to those depicted in David Copperfield. His father, who was a government clerk, was imprisoned for debt and Dickens was briefly sent to work in a blacking warehouse at the age of twelve. He received little formal education, but taught himself shorthand and became a reporter of parliamentary debates for the Morning Chronicle. He began to publish sketches in various periodicals, which were subsequently republishes as Sketches by Boz. The Pickwick Papers was published in 1836-7 and after a slow start became a publishing phenomenon and Dickens's characters the centre of a popular cult. Part of the secret of his success was the method of cheap serial publication which Dickens used for all of his novels. He began Oliver Twist in 1837, followed by Nicholas Nickleby (1838-9) and The Old Curiosity Shop (1840-41). After finishing Barnaby Rudge (1841) Dickens sets off for America; he went full of enthusiasm for the young republic but, in spite of a triumphant reception, he returned disillusioned. His experiences are recorded in American Notes (1842). Martin Chuzzlewit (1843-4) did not repeat its predecessors' success but this was quickly redressed by the huge popularity of the Christmas Books, of which the first, A Christmas Carol, appeared in 1842. During 1844-6 Dickens travelled abroad and he began Dombey and Son (1846-8) while in Switzerland. This and David Copperfield (1849-50) were more serious in theme and more carefully planned than his early novels. In later works, such as Bleak House (1852-3) and Little Dorrit (1855-7), Dickens's social criticism became more radical and his comedy more savage. In 1850 Dickens started the weekly periodical Household Words, succeeded in 1859 by All the Year Round; in there he published Hard Times (1854), A Tale of Two Cities (1859) and Great Expectations (1860-61). Dickens's health was failing during the 1860s and the physical strain of public readers which he began in 1858 hastened his decline, although Our Mutual Friend (1864-5) retained some of his best comedy. His last novel, The Mystery of Edwin Drood, was never completed and he died on 9 June 1870. Public grief at his death was considerable and he was buried in the Poet's Corner of Westminster Abbey.

JESSICA HISCHE is a letterer, illustrator, typographer, and web designer. She currently serves on the Type Directors Club board of directors, has been named a Forbes Magazine "30 under 30" in art and design as well as an ADC Young Gun and one of Print Magazine's "New Visual Artists." She has designed for Wes Anderson, McSweeney's, Tiffany & Co, Penguin Books and many others. She resides primarily in San Francisco, occasionally in Brooklyn.
Winner of the 2012 Fifty Books/Fifty Covers show, organized by Design Observer in association with AIGA and Designers & Books