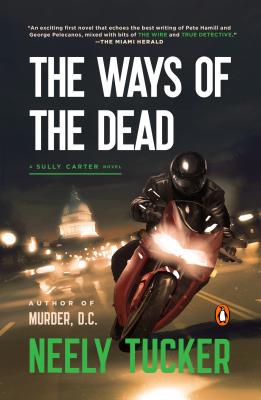 This is book number 1 in the A Sully Carter Novel series.

"An exciting first novel that echoes the best writing of Pete Hamill and George Pelecanos, mixed with bits of The Wire and True Detective."
—The Miami Herald

The electrifying first novel in a new crime series from a veteran Washington, D.C., reporter

Sarah Reese, the teenage daughter of a powerful Washington, D.C. judge, is dead, her body discovered in a slum in the shadow of the Capitol. Though the police promptly arrest three local black kids, newspaper reporter Sully Carter suspects there’s more to the case. Reese’s slaying might be related to a string of cold cases the police barely investigated, among them the recent disappearance of a gorgeous university student.

A journalist brought home from war-torn Bosnia and hobbled by loss, rage, and alcohol, Sully encounters a city rife with its own brand of treachery and intrigue. Weaving through D.C.’s broad avenues and shady backstreets on his Ducati 916 motorcycle, Sully comes to know not just the city’s pristine monuments of power but the blighted neighborhoods beyond the reach of the Metro. With the city clamoring for a conviction, Sully pursues the truth about the murders—all against pressure from government officials, police brass, suspicious locals, and even his own bosses at the paper.

A wry, street-smart hero with a serious authority problem, Sully delves into a deeply layered mystery, revealing vivid portraits of the nation’s capital from the highest corridors of power to D.C.’s seedy underbelly, where violence and corruption reign supreme—and where Sully must confront the back-breaking line between what you think and what you know, and what you know and what you can print. Inspired by the real-life 1990s Princeton Place murders and set in the last glory days of the American newspaper, The Ways of the Dead is a wickedly entertaining story of race, crime, the law, and the power of the media. Neely Tucker delivers a flawless rendering of a fast-paced, scoop-driven newsroom—investigative journalism at its grittiest.

Neely Tucker is the author of two Sully Carter novels Murder D.C. and The Ways of the Dead, and the memoir Love in the Driest Season, which was named one of the Best 25 Books of the Year by Publishers Weekly. Currently a staff writer at The Washington Post Sunday magazine, Tucker lives with his family in Maryland.

“Setting his tale in the 1990s . . . gives Tucker the chance to show how much newspapers have changed. The 24-hour Internet news cycle hasn’t yet taken root, tomorrow’s front page is still more important than getting the story online immediately and good reporters are dependent on door knocks, land lines and library research rather than e-mail, cellphones and Google. Tucker pulls off a neat, double-twist ending . . . There’s a lot to like in Tucker’s storytelling.”
—The Washington Post

“Tucker may be a first-time novelist, but as a career writer, he is well ahead of many of his peers, and this book is worthy of Elmore Leonard’s legacy. . . . With equal ear for newsroom patter and street slang, Tucker has presented an exciting first novel that echoes the best writing of Pete Hamill and George Pelecanos, mixed with bits of The Wire and True Detective.”
—The Miami Herald

“Gritty and masterful . . .  A mystery that will leave readers waiting for the next in the series.”
—Washingtonian

"An utterly thrilling mystery set in Washington, D.C., in the late 1990s, just before the Internet and the rise of smartphones changed the landscape of print journalism. . . . Meticulously plotted, fast-paced . . . Every character is fully fleshed out and the dialogue is pitch perfect. . . . For mystery and crime fiction lovers, particularly fans of Elmore Leonard, to whom Tucker dedicates his book, this is a must-read."
—Associated Press

“A tense and gripping crime novel of race and power, but its true magic lies in the dialogue, which is textured and nuanced in the manner of Elmore Leonard, James Crumley or George Pelecanos. This is a very fine debut indeed, and one that begs for sequel after sequel.”
—BookPage

“Tucker, a writer of power and grace, gives great life to the newspaper milieu and he’s just as resourceful in shaping the story of an apparent serial killer in inner city Washington. It’s done up in a plot full of curve balls, shocks and surprises that we readers never see coming.”
—The Toronto Star

“Journalist-novelist Tucker has crafted an addictive, twisty, debut, proving that crimes involving politics and sex can still surprise and thrill us. The slightly detached and cynical air will resonate with George Pelecanos readers and yet there’s a whiff of Elmore Leonard, too.”
—Library Journal (starred review)

"The Ways of the Dead is a great read. Deep characters, pitch perfect dialogue and a plot with as many curves as the Rock Creek Parkway as it moves through the side of Washington D.C. far away from the Smithsonian. Neely Tucker takes this novel up an even further notch with a story framed around the hot button issues of our time, including race, justice and the media. If this is Tucker's first novel, I can't wait for what's coming next."
—Michael Connelly, #1 New York Times bestselling author of The Gods of Guilt

“From the powerful opening to the shocking finale, The Ways of the Dead delivers the very best in gritty, hard-edged suspense.  Complex characters, taut dialogue, and a riveting plot all add up to one extremely excellent novel.”
—Lisa Gardner, #1 New York Times bestselling author of Fear Nothing

“In a textured, wholly believable Washington, D.C., simultaneously near and far from the corridors of power, Neely Tucker, in his accomplished mystery debut, has created a gripping tale of secrets and lies, malice and mayhem . . . and very dead young women.”
—Otto Penzler, Co-editor of The Best American Noir of the Century

"The Ways Of The Dead has everything you'd want from a book noir—enveloping atmosphere, flavorful characters, evocative writing, and a serpentine plot which seems to make the pages turn themselves. Neely Tucker is an impressive new talent."
—Richard North Patterson, #1 New York Times bestselling author of Loss of Innocence


Praise for Love in the Driest Season: A Family Memoir
“A triumph of heart and will.” —O, the Oprah Magazine

“An extraordinary book of immense feeling and significant social relevance. Love in the Driest Season challenges anyone—even those numbed by the world’s abundant cruelty—not to care.” —Washington Post

“I loved Neely Tucker’s Love in the Driest Season. There is breathtaking suspense in this true story set in Africa. I swear you will be moved like seldom before, if ever." —Elmore Leonard

“Unceasingly compelling and filled with soaring highs and lows, Love in the Driest Season is a remarkable memoir of love and family.” —Pages

“A gorgeous mix of family memoir and reportage that traverses the big issues of politics, racism, and war.” —Publishers Weekly (starred review)

“Tucker’s hard-hitting memoir . . . is an almost unbelievable tale of bureaucracy, lunacy, and love. The suspense is stomach-wrenching and infuriating.” —Orlando Sentinel