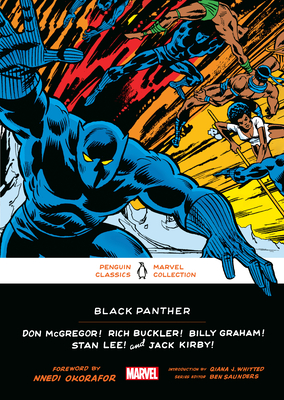 
On Our Shelves Now
The Penguin Classics Marvel Collection presents the origin stories, seminal tales, and characters of the Marvel Universe to explore Marvel’s transformative and timeless influence on an entire genre of fantasy.

Collects Fantastic Four #52-53 (1966); Jungle Action #6-21 (1973-1976). It is impossible to imagine American popular culture without Marvel Comics. For decades, Marvel has published groundbreaking visual narratives that sustain attention on multiple levels: as metaphors for the experience of difference and otherness; as meditations on the fluid nature of identity; and as high-water marks in the artistic tradition of American cartooning, to name a few.

The Black Panther is not just a super hero; as King T’Challa, he is also the monarch of the hidden African nation of Wakanda. Combining the strength and stealth of his namesake with a creative scientific intelligence, the Black Panther is an icon of Afro-futurist fantasy. This new anthology includes the Black Panther’s 1966 origin tale and the entirety of the critically acclaimed “Panther’s Rage” storyline from his 1970s solo series.

A foreword by Nnedi Okorafor, a scholarly introduction and apparatus by Qiana J. Whitted, and a general series introduction by Ben Saunders offer further insight into the enduring significance of Black Panther and classic Marvel comics.

The Penguin Classics black spine paperback features full-color art throughout.
A regular contributor to Marvel’s letter columns as a teen, Don McGregor broke into comics writing short stories for Warren’s Publishing black-and-white magazines Creepy, Eerie, and Vampirella. Making the jump to Mar­vel Comics as a writer-editor in the mid-1970s, he combined a penchant for densely descriptive prose captions and character- riven narrative with the excitement of super hero drama on the first solo series devoted to the ad­ventures of the Black Panther. His groundbreaking run brought a new so­cial relevance to the series, and McGregor’s vision of T’Challa, his people, and the nation of Wakanda remains influential to this day. Concurrent with his work on the Panther, McGregor collaborated with artist P. Craig Russell on Killraven in Amazing Adventures: a science-fiction romance about an earthbound hero’s struggles against Martian invaders. In this series, too, McGregor pushed back against the presumptions of racism: Killraven featured mainstream comics’ first interracial kiss. His later works include the graphic novel and subsequent series Sabre (with artist Paul Gulacy) and Detectives Inc. (with Marshall Rogers and Gene Colan), both published by Eclipse, and a pair of well- received noir detective miniseries, Nathaniel Dusk (also illustrated by Colan) for DC comics. The 1980s would also see McGregor return to Killraven and Black Panther; the former in a lushly illustrated graphic novel with P. Craig Russell, the latter following up storylines from Jungle Action in the Marvel Comics Presents anthology and a four-issue miniseries, Black Panther: Panther’s Prey. McGregor has also written the syndicated Zorro newspaper strip, and published the prose fictions Dragonflame & Other Bedtime Nightmares and The Variable Syndrome, among other works.

Rich Buckler (1949–2017) was a versatile artist who drew hundreds of pages for Marvel, DC, Archie, Warren, and others, during his long ca­reer. Among his most notable work for Marvel: In the 1970s he helped introduce Deathlok in the pages of Astonishing Tales; penciled several storylines in Peter Parker, the Spectacular Spider-Man; and enjoyed runs on Fantastic Four, Thor, and other monthly titles, including the first solo series featuring the Black Panther. Buckler’s DC work includes Lois Lane, The Secret Society of Super-Villains, and World’s Finest, as well as the groundbreaking Superman vs. Shazam. Buckler was also editor of the short-lived Solson Publications and wrote two books on comic book art.

Billy Graham (or the “Irreverent Billy Graham,” as he was known around the Marvel Bullpen, a play on the name of the popular evangelist) was one of the industry’s brightest young talents in the 1970s. He honed a style born out of his love of fantasy stylists such as Frank Frazetta and Al Williamson and his adoration of comic art legend Jack Kirby. Like many young artists from the 1970s, Billy got his start on Warren’s line of black-and-white horror mags Creepy, Eerie, and Vampirella. Impressed by Graham’s all- round talent as an artist and storyteller, publisher James Warren made Graham art director for the Warren line, a position he held until he jumped over to Marvel Comics. The first book handed to him was Hero for Hire; he penciled, co‑plotted, and/ or inked the first sixteen issues of Luke Cage’s title, Marvel’s first ongoing series following the solo adventures of a Black character. Joining Don McGregor on the Black Pan­ther in Jungle Action for his next assignment, Graham—the first Black creator to work on the character—would help to define the Wakandan warrior king for a generation of readers. Graham later reunited with McGregor for the writer’s Eclipse series, Sabre, in the mid- 980s. His final comics work appeared in 1985’s Power Man and Iron Fist #114. Graham was also a playwright, theatrical set designer, stage and film actor, and commercial artist. He passed away in 1997 at the age of sixty-one.

Writer-editor Stan Lee (1922–2018) and artist Jack Kirby made comic book history in 1961 with The Fantastic Four #1. The success of its new style inspired Lee and his many collaborators to develop a number of super heroes, including, with Jack Kirby, the Incredible Hulk and the X‑Men; with Steve Ditko, the Amazing Spider-Man and Doctor Strange; and with Bill Everett, Daredevil. Lee oversaw the adventures of these cre­ations for more than a decade before handing over the editorial reins at Marvel to others and focusing on developing Marvel’s properties in other media. For the remainder of his long life, he continued to serve as a cre­ative figurehead at Marvel and as an ambassador for the comics medium as a whole. In his final years, Lee’s signature cameo appearances in Mar­vel’s films established him as one of the world’s most famous faces.

Born Jacob Kurtzberg in 1917 to Jewish-Austrian parents on New York’s Lower East Side, Jack Kirby came of age at the birth of the American comic book industry. Horrified by the rise of Nazism, Kirby co‑created the patriotic hero Captain America with Joe Simon in 1940. Cap’s ex­ploits on the comic book page entertained millions of American readers at home and inspired US troops fighting the enemy abroad. Kirby’s partner­ship with Simon continued throughout the 1940s and early ’50s; together, they produced comics in every popular genre, from Western to romance. In 1958, Kirby began his equally fruitful collaboration with writer-editor Stan Lee, and in 1961 the two men co‑created the foundational text of the modern Marvel Universe: The Fantastic Four. Over the next decade, Kirby and Lee would introduce a mind-boggling array of new characters— including the Avengers, the Hulk, Thor, Iron Man, the Silver Surfer, and the X‑Men. Kirby’s groundbreaking work with Lee formed the foundation of the Marvel Universe. In the early 1970s, Kirby moved to DC Comics, where he created his interconnected Fourth World series, as well as freestanding titles such as The Demon. He returned to Marvel in 1975, writing and illus­trating The Black Panther and Captain America and introducing series such as Devil Dinosaur and the Eternals. Kirby died in 1994. Today, he is gener­ally regarded as one of the most important and influential creators in the history of American comics. His work has inspired multiple generations of writers, artists, designers, and filmmakers, who continue to explore his vast universe of concepts and characters. He was an inaugural inductee into the Eisner Hall of Fame in 1987.

Nnedi Okorafor is a Nigerian American author of African-based sci­ence fiction, fantasy, and magical realism for children and adults. Her works include Who Fears Death (currently in development at HBO into a TV series), the Binti novella trilogy, The Book of Phoenix, the Akata books, and Lagoon. She is the winner of Hugo, Nebula, World Fantasy, Locus, and Lodestar Awards, an Eisner Award nominee, and her debut novel Zahrah the Windseeker won the prestigious Wole Soyinka Prize for Literature. Nnedi has also written comics for Marvel, including Black Panther: Long Live the King and Wakanda Forever (featuring the Dora Milaje) and the Shuri series. Her science fiction comic series LaGuardia (from Dark Horse) is an Eisner and Hugo Award winner, and her memoir, Broken Places & Outer Spaces, is a Locus Award nominee. Nnedi holds two MAs (literature and journalism) and a PhD (literature).

Qiana J. Whitted is a professor of English and African American Studies at the University of South Carolina. She is the author of the Eisner Award– inning book EC Comics: Race, Shock, and Social Protest and co‑editor of the collection Comics and the U.S. South. She is also the ed­itor of Inks: The Journal of the Comics Studies Society and chair of the International Comic Arts Forum.

Ben Saunders is a professor of English at the University of Oregon. He is the author of Desiring Donne: Poetry, Sexuality, Interpretation and Do the Gods Wear Capes?: Spirituality, Fantasy, and Superheroes, as well as numerous critical essays on subjects ranging from the writings of Shakespeare to the recordings of Little Richard. He has also curated sev­eral museum exhibitions of comics art, including the record-breaking multimedia touring show Marvel: Universe of Super Heroes— retro­spective exploring the artistic and cultural impact of Marvel Comics from 1939 to the present.