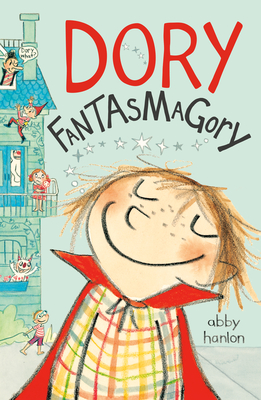 This is book number 1 in the Dory Fantasmagory series.

— From Jill
Move over, Junie B. Jones and Ivy & Bean! Here comes a lovably energetic little sister with a BIG personality—and an imagination to match!

As the youngest in her family, Dory really wants attention, and more than anything she wants her brother and sister to play with her. But she’s too much of a baby for them, so she’s left to her own devices—including her wild imagination and untiring energy. Her siblings may roll their eyes at her childish games, but Dory has lots of things to do: outsmarting the monsters all over the house, escaping from prison (aka time-out), and exacting revenge on her sister’s favorite doll. And when they really need her, daring Dory will prove her bravery, and finally get exactly what she has been looking for.

With plenty of pictures bursting with charm and character, this hilarious book about an irresistible rascal is the new must-read for the chapter book set.
Abby Hanlon is a former teacher. Inspired by her students’ storytelling, Abby began to write her own stories for children, and taught herself to draw. She is the author of Ralph Tells a Story. Abby lives in Brooklyn, New York, with her husband and their two children.
Praise for Dory Fantasmagory

"Perfection of tone, plot, pacing, art, you name it. Author Abby Hanlon has taken a universal childhood desire (the wish of the younger sibling for the older ones to play with them) and turned it into a magnificent epic fantasy complete with sharp-toothed robbers, bearded fairy godmothers, and what may be the most realistic 6-year-old you’ll ever meet on a page. In a word, fantastico." —SLJ Fuse 8 Blog

"“This book has everything going for it: A throbbing heart at its center …humor in spades and charm to spare...this is one of the best children’s books I’ve seen all year.”—Kirkus Reviews blog