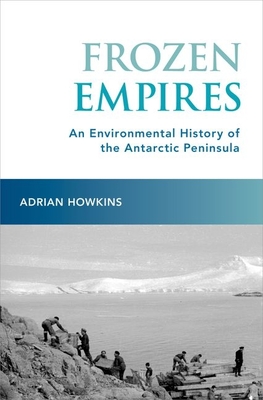 By Adrian Howkins
Email or call for price

Perpetually covered in ice and snow, the mountainous Antarctic Peninsula stretches southwardd towards the South Pole where it merges with the largest and coldest mass of ice anywhere on the planet. Yet far from being an otherworldly "Pole Apart," the region has the most contested political history of any part of the Antarctic Continent. Since the start of the twentieth century, Argentina, Britain, and Chile have made overlapping sovereignty claims, while the United States and Russia have reserved rights to the entire continent. The environment has been at the heart of these disputes over sovereignty, placing the Antarctic Peninsula at a fascinating intersection between diplomatic history and environmental history. In Frozen Empires, Adrian Howkins argues that there has been a fundamental continuity in the ways in which imperial powers have used the environment to support their political claims in the Antarctic Peninsula region. British officials argued that the production of useful scientific knowledge about the Antarctic helped to justify British ownership. Argentina and Chile made the case that the Antarctic Peninsula belonged to them as a result of geographical proximity, geological continuity, and a general sense of connection. Despite various challenges and claims, however, there has never been a genuine decolonization of the Antarctic Peninsula region. Instead, imperial assertions that respective entities were conducting science "for the good of humanity" were reformulated through the terms of the 1959 Antarctic Treaty, and Antarctica's "frozen empires" remain in place to this day. In arguing for imperial continuity in the region, Howkins counters the official historical narrative of Antarctica, which rests on a dichotomy between "bad" sovereignty claims and "good" scientific research. Frozen Empires instead suggests that science, politics, and the environment have been inextricably connected throughout the history of the Antarctic Peninsula region--and remain so--and shows how political prestige in the guise of conducting "science for the good of humanity" continues to influence international climate negotiations.