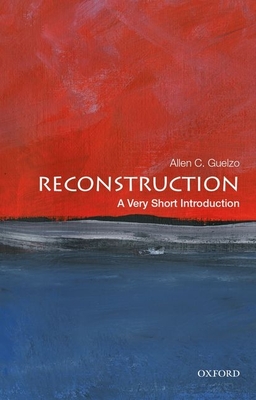 
On Our Shelves Now
The era known as Reconstruction is one of the unhappiest times in American history. It succeeded in reuniting the nation politically after the Civil War but in little else. Among its chief failures was the inability to chart a progressive course for race relations after the abolition of
slavery and rise of Jim Crow. Reconstruction also struggled to successfully manage the Southern resistance towards a Northern, free-labor pattern. But the failures cannot obscure a number of notable accomplishments, with decisive long-term consequences for American life: the 14th and 15th Amendments
to the Constitution, the election of the first African American representatives to the US Congress, and the avoidance of any renewed outbreak of civil war. Reconstruction suffered from poor leadership and uncertainty of direction, but it also laid the groundwork for renewed struggles for racial
equality during the Civil Rights Movement. This Very Short Introduction delves into the constitutional, political, and social issues behind Reconstruction to provide a lucid and original account of a historical moment that left an indelible mark on American social fabric. Award-winning historian Allen C. Guelzo depicts Reconstruction as a
bourgeois revolution -- as the attempted extension of the free-labor ideology embodied by Lincoln and the Republican Party to what was perceived as a Southern region gone astray from the Founders' intention in the pursuit of Romantic aristocracy. ABOUT THE SERIES:
The Very Short Introductions series from Oxford University Press contains hundreds of titles in almost every subject area. These pocket-sized books are the perfect way to get ahead in a new subject quickly. Our expert authors combine facts, analysis, perspective, new ideas, and enthusiasm to make
interesting and challenging topics highly readable.

Allen C. Guelzo is the Henry R. Luce Professor of the Civil War Era and Director of Civil War Era Studies at Gettysburg College. Three-time winner of the Lincoln Prize, he is the author of Abraham Lincoln: Redeemer President, Lincoln's Emancipation Proclamation: The End of Slavery in America, Lincoln: A Very Short Introduction, and Fateful Lightning: A New History of the Civil War and Reconstruction.