You & Your Aging Parent: A Family Guide to Emotional, Social, Health, and Financial Problems (Paperback) 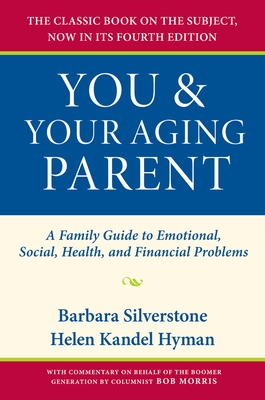 You & Your Aging Parent: A Family Guide to Emotional, Social, Health, and Financial Problems (Paperback)


Usually Arrives in Store in 1-5 Days
(This book cannot be returned.)
First published in 1976, You and Your Aging Parent is a classic--the first book to shed light on the challenging relationship between adult children and their aging parents, illuminating the emotional, health, and financial difficulties that elderly parents and their children face during the senior years.
Marking the 30th anniversary of this highly popular book, the new and revised edition addresses the changes that have taken place in the last three decades, but it still embraces the authors' fundamental insight--that the difficulties and challenges of the aging process are as much a family affair as in any other phase of life. Both a sensitive exploration of the dynamics of the aging family relationship (between parent and child, and sibling and sibling) and an authoritative how-to guide for seniors and their families navigating the practical problems of growing old in America, You and Your Aging Parent has been thoroughly updated to reflect the latest research findings and changes affecting older adults, including in health care and social services. The book also includes a running commentary by Bob Morris--playwright, author, and humorist--who provides insightful and entertaining observations about his trials and tribulations with his own parents as they aged, serving as a contemporary voice for the middle-aged caregiver of today.
As the first of the baby boom generation turns 60 and their increasingly frail parents approach late retirement and final decline, this new and updated edition of You and Your Aging Parent will answer their need for authoritative, practical information about this major phase of life.

Barbara Silverstone, DSW, is past president of the Gerontological Society of America and a member of the American Society on Aging and the National Association of Social Workers. A former President and CEO of Lighthouse International, she was co-editor-in-chief of The Lighthouse Handbook on Vision Impairment and Vision Rehabilitation (OUP, 2000) and co-author (also with Helen Kandel Hyman) of Growing Old Together. She lives in New York City. Helen Kandel Hyman was a free-lance writer whose career dates back to the Golden Age of radio, when she wrote dramatic scripts for CBS. She died in March 2006. Bob Morris is a columnist for the Sunday New York Times and often writes about issues of aging in his column. He is also the author of the play Assisted Loving, about his now-deceased father.