The Jew in the Modern World: A Documentary History (Paperback) 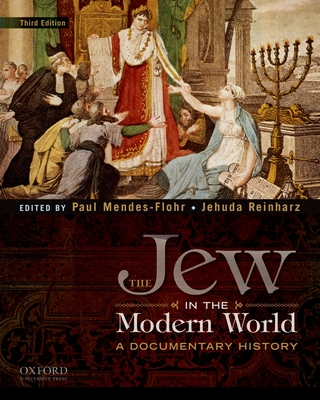 The Jew in the Modern World: A Documentary History (Paperback)

The last two centuries have witnessed a radical transformation of Jewish life. Marked by such profound events as the emancipation from the ghettoes of Europe, the Holocaust and the establishment of the State of Israel, Judaism's long journey through the modern age has been a complex and tumultuous one, leading many Jews to ask themselves not only where they have been and where they are going, but what it means to be a Jew in today's world. Tracing the dramatic changes in Jewish religion, culture, and identity from the seventeenth century to 1948, The Jew in the Modern World, Third Edition, remains the most complete sourcebook on modern Jewish history available. Now thoroughly expanded and updated, this critically acclaimed volume of primary materials features previously unpublished and inaccessible sources concerning the Jewish experience in Eastern Europe, the Middle East, and North Africa; women in Jewish history; American Jewish life; the Holocaust; and Zionism and the nascent Jewish community in Palestine on the eve of the establishment of the State of Israel. The documents are arranged chronologically in each chapter and are meticulously and extensively annotated and cross-referenced. Providing useful tables detailing Jewish demographic trends, this unique text is ideal for courses in modern Jewish history, Zionism and Israel, the Holocaust, or modern European history.