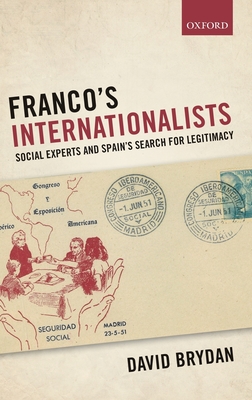 
Usually Arrives in Store in 1-5 Days
Despite the repression, violence, and social hardship which characterised Spanish life in the 1940s and 1950s, the Franco regime sought to win popular support by promoting its apparent commitment to social justice. David Brydan reveals the vital role which the idea of the Francoist 'social state' also played in the regime's ongoing search for international legitimacy. Using research from eighteen archives across six countries, Brydan shows how social experts, particularly those working in the fields of public health, medicine, and social insurance, were at the forefront of efforts to promote the regime abroad. By working with international organisations in Geneva, Paris, and New York and with transnational networks of colleagues across Europe, Africa, and Latin America, they sought to sell the idea of Franco's Spain as a respectable, modern, and socially-just state. They were internationalists, but they were Franco's internationalists. In telling this story, the study disrupts our understanding of the modern history of internationalism. Exploring what it meant for Francoist experts to think and act internationally, it challenges dominant accounts of internationalism as a liberal, progressive movement by foregrounding the history of fascist, nationalist, imperialist, and religious forms of international cooperation. It also brings into focus the overlooked continuities between international structures and projects before and after 1945. The case of Spain reveals the contested and heterogeneous nature of mid-twentieth century internationalism, characterised by the competition between overlapping global, regional, and imperial projects.