Night Raiders: Burglary and the Making of Modern Urban Life in London, 1860-1968 (Hardcover) 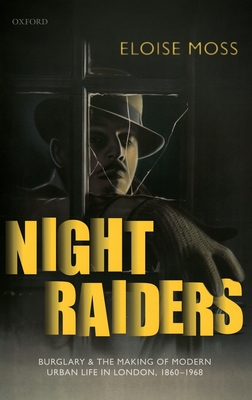 Night Raiders: Burglary and the Making of Modern Urban Life in London, 1860-1968 (Hardcover)


Usually Arrives in Store in 1-5 Days
Night Raiders is the first history of burglary in modern Britain. Until 1968, burglary was defined in law as occurring only between the 'night-time' hours of nine pm and six am in residential buildings. Time and space gave burglary a unique cloak of terror, since burglars' victims were likely to be in the bedroom, asleep and unawares, when the intruder crept in, prowling near them in the darkness. Yet fear sometimes gave way to sexual fantasy; eroticized visions of handsome young thieves sneaking around the boudoirs of beautiful, lonely heiresses emerged alongside tales of violence and loss in popular culture, confounding social commentators by casting the burglar as criminal hero. Night Raiders charts how burglary lay historically at the heart of national debates over the meanings of 'home', experiences of urban life, and social inequality. The book explores intimate stories of the devastation caused by burglars' presence in the most private domains, showing how they are deeply embedded within broader histories of capitalism and liberal democracy. The fear and fascination surrounding burglary were mobilized by media, state, and market to sell insurance and security technologies, whilst also popularising the crime in fiction, theatre, and film. Cat burglars' rooftop adventures transformed ideas about the architecture and policing of the city, and post-war 'spy-burglars' theft of information illuminated Cold War skirmishes across the capital. More than any other crime, burglary shaped the everyday rhythms, purchases, and perceptions of modern urban life.