The Third Industrial Revolution: How Lateral Power Is Transforming Energy, the Economy, and the World (Paperback) 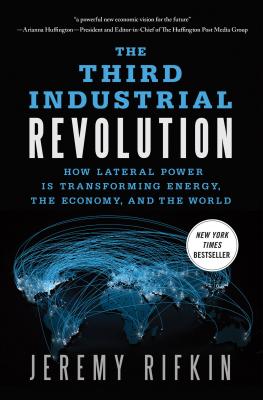 The Third Industrial Revolution: How Lateral Power Is Transforming Energy, the Economy, and the World (Paperback)

The Industrial Revolution, powered by oil and other fossil fuels, is spiraling into a dangerous endgame. The price of gas and food are climbing, unemployment remains high, the housing market has tanked, consumer and government debt is soaring, and the recovery is slowing. Facing the prospect of a second collapse of the global economy, humanity is desperate for a sustainable economic game plan to take us into the future.

Here, Jeremy Rifkin explores how Internet technology and renewable energy are merging to create a powerful "Third Industrial Revolution." He asks us to imagine hundreds of millions of people producing their own green energy in their homes, offices, and factories, and sharing it with each other in an "energy internet," just like we now create and share information online.

Rifkin describes how the five-pillars of the Third Industrial Revolution will create thousands of businesses, millions of jobs, and usher in a fundamental reordering of human relationships, from hierarchical to lateral power, that will impact the way we conduct commerce, govern society, educate our children, and engage in civic life.
Rifkin's vision is already gaining traction in the international community. The European Union Parliament has issued a formal declaration calling for its implementation, and other nations in Asia, Africa, and the Americas, are quickly preparing their own initiatives for transitioning into the new economic paradigm.
The Third Industrial Revolution is an insider's account of the next great economic era, including a look into the personalities and players — heads of state, global CEOs, social entrepreneurs, and NGOs — who are pioneering its implementation around the world.

Jeremy Rifkin is president of the Foundation on Economic Trends and the bestselling author of twenty-two books, including The Third Industrial Revolution, The Zero Marginal Cost Society, The Green New Deal, The End of Work, and The Empathic Civilization. The National Journal named Rifkin as one of 150 people in the U.S. that have the most influence in shaping federal government policy. He has also testified before numerous congressional committees. Since 1994, Mr. Rifkin has been a senior lecturer at the Wharton School’s Executive Education Program at the University of Pennsylvania. Rifkin is ranked 123 in the WorldPost / HuffingtonPost 2015 global survey of “The World’s Most Influential Voices.” Rifkin has been an advisor to the leadership of the European Union since 2000. He also serves as an advisor to the People's Republic of China.

“Jeremy Rifkin was always ahead of his time. The New Industrial Revolution confirms that the times have caught up with him. It is no longer possible to ignore his vision for the future of humankind.” —Calestous Juma, Harvard Belfer Center for Science and International Affairs, John F. Kennedy School

“Jeremy Rifkin argues that green energy and the internet will revolutionize society and the environment...With the European Union already on board, this is a big idea with backbone.” —Nature

“Impeccably argued…a compelling and cogent argument to overhaul our society and economy in favor of a distributed and collaborative model.” —Publishers Weekly

“Rifkin connects the two defining technologies of the 21st Century -- the Internet and renewable energies -- giving us a powerful new economic vision for the future. As we look to regrow the economy, generate millions of jobs, and create a sustainable future for our children, the Third Industrial Revolution offers an indispensable roadmap.” —Arianna Huffington, President and Editor-in-Chief of The Huffington Post Media Group

“The creative thinking of Jeremy Rifkin has been inspiring policy makers and citizens alike. This book shows the key role renewables and modern technologies can play in our transition to a low-carbon economy.” —José Manuel Barroso, President of the European Commission

“This is a remarkable piece of work from one of the foremost thinkers of our time…Rifkin has come up with a visionary and innovative economic development model that ensures the sustainability of our natural resources and ecosystems.” —Rajendra Pachauri, Chairman of the United Nations Intergovernmental Panel on Climate Change

“A brilliant new economic paradigm to guide the human journey in the 21st century. Jeremy Rifkin's comprehensive Third Industrial Revolution vision, which is the centerpiece of Rome's long-term economic development plan, provides a blueprint for every city in the world to create a sustainable and prosperous society.” —Gianni Alemanno, Mayor of Rome

“More than thought provoking… a call for action to policy makers and business leaders to embrace the opportunity of a society and economy driven by sustainable innovation and powered by renewable and distributed energy.” —Rudy Provoost, CEO of Philips Lighting