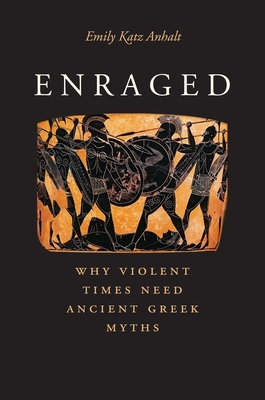 
Email or call for price.
An examination of remedies for violent rage rediscovered in ancient Greek myths

Millennia ago, Greek myths exposed the dangers of violent rage and the need for empathy and self-restraint. Homer’s Iliad, Euripides’ Hecuba, and Sophocles’ Ajax show that anger and vengeance destroy perpetrators and victims alike. Composed before and during the ancient Greeks’ groundbreaking movement away from autocracy toward more inclusive political participation, these stories offer guidelines for modern efforts to create and maintain civil societies. Emily Katz Anhalt reveals how these three masterworks of classical Greek literature can teach us, as they taught the ancient Greeks, to recognize violent revenge as a marker of illogical thinking and poor leadership. These time-honored texts emphasize the costs of our dangerous penchant for glorifying violent rage and those who would indulge in it. By promoting compassion, rational thought, and debate, Greek myths help to arm us against the tyrants we might serve and the tyrants we might become.
Emily Katz Anhalt teaches classical languages and literature at Sarah Lawrence College. She is the author of Solon the Singer: Politics and Poetics.
“An engaging and sometimes inspiring guide to the rich complexities of the Iliad.”—Mary Beard, New York Times Book Review

“Anhalt’s contribution is building an overarching narrative of how the Greeks engaged problems of anger—problems that continue to provoke—to imagine ways of living together.”—Choice

"Anhalt has taken on three of history’s most important works of literature and applied their lessons to the present day. Enraged is an important reminder that reflection, dialogue, and empathy have no boundaries or time limits."—Amanda Foreman, author of Georgiana, Duchess of Devonshire

"The moral power of Greek myths is tireless in questioning the human passion for violence. Reading this lively book brings back to life the urgent need to be so questioned."—Gregory Nagy, Harvard University

“This book closely engages with ancient texts and in so doing shows how turning one’s gaze away from political and social issues of the twenty-first century can actually help one return to those issues with new perspective and modes of approach.”—Jonathan Master, Emory University