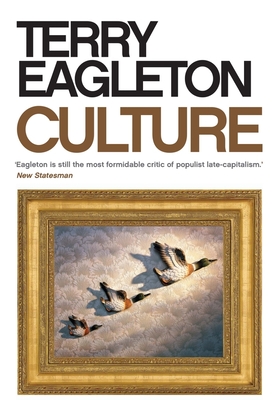 Culture is a defining aspect of what it means to be human. Defining culture and pinpointing its role in our lives is not, however, so straightforward. Terry Eagleton, one of our foremost literary and cultural critics, is uniquely poised to take on the challenge. In this keenly analytical and acerbically funny book, he explores how culture and our conceptualizations of it have evolved over the last two centuries—from rarified sphere to humble practices, and from a bulwark against industrialism’s encroaches to present-day capitalism’s most profitable export. Ranging over art and literature as well as philosophy and anthropology, and major but somewhat "unfashionable" thinkers like Johann Gottfried Herder and Edmund Burke as well as T. S. Eliot, Matthew Arnold, Raymond Williams, and Oscar Wilde, Eagleton provides a cogent overview of culture set firmly in its historical and theoretical contexts, illuminating its collusion with colonialism, nationalism, the decline of religion, and the rise of and rule over the "uncultured" masses. Eagleton also examines culture today, lambasting the commodification and co-option of a force that, properly understood, is a vital means for us to cultivate and enrich our social lives, and can even provide the impetus to transform civil society.
Terry Eagleton is distinguished professor of English literature, University of Lancaster. He lives in Northern Ireland.
"An impressive display of erudition."—Publishers Weekly

"Eagleton is a clear, combative writer whom it is always a pleasure to read, even—or especially—for those who disagree with him. Culture exhibits his virtues to the full."—Theodore Dalrymple, author of Our Culture, What's Left of It

"Eagleton’s central notion, that culture is the 'social unconscious,' is beautifully delineated. He gives us a seamless journey from Marx, through Nietzsche and Freud, to Burke, Herder, Wittgenstein, T.S. Eliot and Wilde, but at the same time takes in popular idioms, in a hugely satisfying marriage of 'high' and 'low.' Reflection at a level we used to take for granted among scholars but is now all too rare."—Peter Watson, author of The Age of Nothing: How We Have Sought To Live Since The Death of God