Our Common Ground: A History of America's Public Lands (Hardcover) 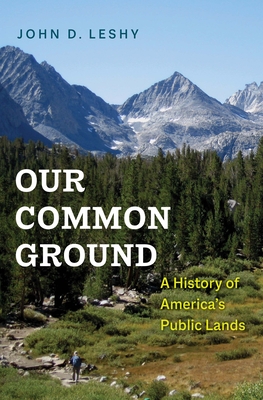 Our Common Ground: A History of America's Public Lands (Hardcover)


Usually Arrives in Store in 1-5 Days
The little-known story of how the U.S. government came to hold nearly one-third of the nation’s land and manage it primarily for recreation, education and conservation.

“A much-needed chronicle of how the American people decided––wisely and democratically––that nearly a third of the nation’s land surface should remain in our collective ownership and be managed for our common good.”—Dayton Duncan, author of The National Parks: America’s Best Idea

America’s public lands include more than 600 million acres of forests, plains, mountains, wetlands, deserts, and shorelines. In this book, John Leshy, a leading expert in public lands policy, discusses the key political decisions that led to this, beginning at the very founding of the nation. He traces the emergence of a bipartisan political consensus in favor of the national government holding these vast land areas primarily for recreation, education, and conservation of biodiversity and cultural resources. That consensus remains strong and continues to shape American identity. Such a success story of the political system is a bright spot in an era of cynicism about government. This book is essential reading for anyone who cares about public lands, and it is particularly timely as the world grapples with the challenges of climate change and biodiversity loss.

John Leshy became deeply involved with America's public lands soon after his graduation from Harvard College and Harvard Law School.  He was solicitor for the U.S. Department of Interior from 1993 to 2001, is co-author of the standard textbook on public land and resources law (Federal Public Land and Resources Law), and has written and lectured widely on public lands. He is emeritus professor, University of California Hastings College of Law, San Francisco.
“Finally, we have a truly great book about the federal public lands. John Leshy has used his unequalled knowledge and engaging style to write a comprehensive, inspiring, and lastingly informative masterpiece.”—Charles Wilkinson, author of Crossing the Next Meridian: Land, Water, and the Future of the West

“Our Common Ground is a much-needed chronicle of how the American people decided—wisely and democratically—that nearly a third of the nation’s land surface should remain in our collective ownership and be managed for our common good.”—Dayton Duncan, author of The National Parks: America’s Best Idea

“This history of public lands in America, reflecting prodigious research, illustrates the continuity, tensions, and narratives that persist through time to the present. What a rich history, richly presented. I could not put down this book!”—Lynn Scarlett, Former Deputy Secretary, US Department of the Interior

“Read John Leshy’s masterpiece! John shows us that by questioning and reframing our European-centric public lands history we can begin to right the wrongs of the past. And if we get it right, find common purpose and keep our covenant with future Americans.”—Mark Udall, U.S. Senator (Ret.), Colorado

“An extraordinary history that shows the unifying force public lands have played in American life and the promise they hold for stemming the climate and biodiversity crises and sustaining the health of our communities.”—Jamie Williams, President, The Wilderness Society