The Art of War in an Age of Peace: U.S. Grand Strategy and Resolute Restraint (Paperback) 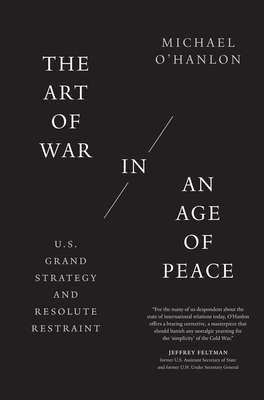 The Art of War in an Age of Peace: U.S. Grand Strategy and Resolute Restraint (Paperback)

“A masterful examination of past American grand strategy and foreign policies. A compelling, thoughtful, and thought-provoking proposal of a new grand strategy by one of America’s foremost writers and thinkers on U.S. defense, foreign policy, and geopolitics.” —General David Petraeus, U.S. Army (Ret.)

Russia and China are both believed to have “grand strategies”—detailed sets of national security goals backed by means, and plans, to pursue them. In the United States, policymakers have tried to articulate similar concepts but have failed to reach a widespread consensus since the Cold War ended. While the United States has been the world’s prominent superpower for over a generation, much American thinking has oscillated between the extremes of isolationist agendas versus interventionist and overly assertive ones.

Drawing on historical precedents and weighing issues such as Russia’s resurgence, China’s great rise, North Korea’s nuclear machinations, and Middle East turmoil, Michael O’Hanlon presents a well‑researched, ethically sound, and politically viable vision for American national security policy. He also proposes complementing the Pentagon’s set of “4+1” pre‑existing threats with a new “4+1”: biological, nuclear, digital, climatic, and internal dangers.
Michael O’Hanlon is senior fellow and director of research in foreign policy at the Brookings Institution, where he holds the Philip H. Knight Chair in defense and strategy; adjunct professor at Columbia, Georgetown, and George Washington Universities; and a member of the Defense Policy Board.
“A masterful examination of past American grand strategy and foreign policies, a compelling, thoughtful, and thought-provoking proposal of a new grand strategy by one of America’s foremost writers and thinkers on U.S. defense, foreign policy, and geopolitics.”—General David Petraeus, U.S. Army (Ret.), former Commander of the Surge in Iraq, U.S. Central Command, and the International Security Assistance Force in Afghanistan, and former Director of the CIA


“An exceptional, vividly-written guide to American strategy in the post-pandemic world, from one of America’s best national security thinkers.  O’Hanlon makes a compelling case for resolute restraint at a moment when the United States is no longer the only big kid on the geopolitical block, and faces an array of new challenges.”—William Burns, Former Deputy Secretary of State


“O’Hanlon’s deep passion for scholarship and his desire to see America do the right thing have animated his decades in Washington. His book is a rewarding read on what the U.S. role in the world should be in these fraught times.”—Jung Pak, Brookings Institution


“Many scholars write about grand strategy, but O’Hanlon’s technical, strategic, and practical skills are unique. His insights are essential for anyone trying to understand how America should navigate the daunting geopolitical environment it confronts today.”—Hal Brands, author of American Grand Strategy in the Age of Trump


“For the many of us despondent about the state of international relations today, O’Hanlon offers a bracing corrective, a masterpiece that should banish any nostalgic yearning for the ‘simplicity’ of the Cold War.”—Jeffrey Feltman, former U.S. Assistant Secretary of State and former U.N. Under Secretary General