Putin vs. the People: The Perilous Politics of a Divided Russia (Paperback) 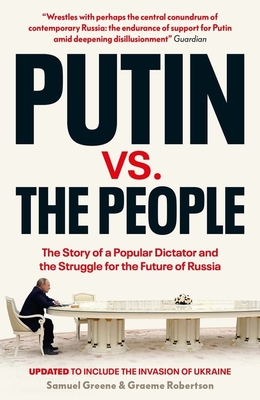 Putin vs. the People: The Perilous Politics of a Divided Russia (Paperback)

By Samuel A. Greene, Graeme B. Robertson


Backordered -- Email or Call for Availability
A fascinating, bottom-up exploration of contemporary Russian politics that sheds new light on why Putin’s grip on power is more fragile than we think

“Putin v. the People wrestles with perhaps the central conundrum of contemporary Russia: the endurance of support for Putin amid deepening disillusionment with the present and pessimism about the future.”—Daniel Beer, The Guardian

What do ordinary Russians think of Putin? Who are his supporters? And why might their support now be faltering? Alive with the voices and experiences of ordinary Russians and elites alike, Sam Greene and Graeme Robertson craft a compellingly original account of contemporary Russian politics.

Telling the story of Putin’s rule through pivotal episodes such as the aftermath of the "For Fair Elections" protests, the annexation of Crimea, and the War in Eastern Ukraine, Greene and Robertson draw on interviews, surveys, social media data, and leaked documents to reveal how hard Putin has to work to maintain broad popular support, while exposing the changing tactics that the Kremlin has used to bolster his popularity. Unearthing the ambitions, emotions, and divisions that fuel Russian politics, this book illuminates the crossroads to which Putin has led his country and shows why his rule is more fragile than it appears.
Sam Greene is reader in Russian politics and director of the Russia Institute at King’s College London. Graeme Robertson is professor of political science at the University of North Carolina at Chapel Hill and director of the Center for Slavic, Eurasian and East European Studies.
“Drawing on extensive on-the-ground research, including focus groups and opinion surveys, Greene and Robertson examine the roots of Putin’s popularity and his support across different sections of Russian society. The current situation has revealed the importance of understanding who supports Putin and why.”—New Statesman

“This volume offers a significant contribution to our understanding of Russian politics, and autocracy in general. It offers a nuanced and persuasive alternative to the vision of an autocrat propped up by chauvinism, fear, and repression. . . . It is written in a journalistic style that is very accessible to general readers and undergraduates. I expect to see it on many syllabi of Russian politics and society in the near future.”—James Richter, Russian Review

Received an Honorable Mention from Davis Center Book Prize, sponsored by The Association for Slavic, East European, and Eurasian Studies

“Groundbreaking research presented in a fresh and accessible style—this book, centering on the positive social and emotional responses of the Russian people to their autocratic political leadership, is a thought-provoking challenge to the clichés and stereotypes surrounding Vladimir Putin.”—Edward Lucas, author of The New Cold War: Putin’s Russia and the Threat to the West

“This engagingly written book concentrates on ordinary Russians, meticulously tracking their reactions to a complex but fragile regime where opposition is significant if limited, and Putin and his people are surprisingly dependent on each other”—Sir Rodric Braithwaite, author and British Ambassador in Moscow 1988-92

“Challenging many conventional assumptions about contemporary Russian society, this fresh, original analysis offers paradoxically an explanation for why Putin is popular—but also why his position is fragile.”—Michael McFaul, Professor of Political Science at Stanford University and Former US Ambassador to Russia

“A deep dive into the complexities of Russian society, Putin's popularity and the protest movement that rocked the Kremlin.”—Arkady Ostrovsky, author of The Invention of Russia