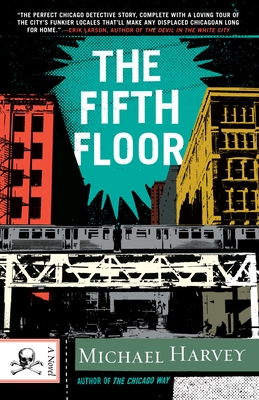 This is book number 2 in the Michael Kelly Series series.

Private detective Michael Kelly returns in a lightning-paced, intricately woven mystery. When Kelly is hired by an old girlfriend to tail her abusive husband, he expects trouble of a domestic rather than a historical nature. Life, however, is not so simple.

The trail leads to a dead body in an abandoned house on Chicago's North Side and then to places Kelly would rather not go: specifically, City Hall's fabled fifth floor, where the mayor is feeling the heat. Kelly becomes embroiled in a scam that stretches from current politics back to the night Chicago burned to the ground. Along the way, he finds himself framed for murder, before finally facing a killer bent on rewriting history.

Michael Harvey is the creator, writer, and executive producer of the television series Cold Case Files, as well as an Academy Award-nominee for his documentary Eyewitness, and is a former investigative reporter for CBS. He earned a law degree at Duke and a masters in journalism from Northwestern. He also owns a bar in Chicago. He is the author of The Chicago Way.

“The perfect Chicago detective story, complete with a loving tour of the city's funkier locales that'll make any displaced Chicagoan long for home.” —Erik Larson, author of The Devil in the White City“Michael Harvey is a magnificent new voice.”—John Grisham“Impressive.... A tangled, fascinating tale.”—Chicago Tribune“A nifty retro-noir series.”—The New York Times Book Review“Dazzlingly good.” —ThePlain-Dealer“Another sophisticated caper.... Harvey brilliantly brings all the threads together and provides a satisfying conclusion.” —The Missourian“Harvey’s superb second thriller . . . Harvey’s plot twists in all the right places, and his noir-inspired dialogue crackles without sounding showy. Marlowe and Spade would readily welcome Michael Kelly into their fold.”—Publishers Weekly (starred review)“PI Michael Kelly digs into the history of the Great Chicago Fire for his second case in what’s shaping up as a strong series. . . . Dry wit, delectable clues and tricky leads hallmark this trenchant tale of the Windy City.”—Kirkus Reviews (starred review)Praise for The Chicago Way“The Chicago Way is a wonderful first novel. Michael Harvey has studied the masters and put his own unique touch on the crime novel. This book harkens the arrival of a major new voice.”—Michael Connelly, author of the bestselling Harry Bosch novels“An intricate, fast-paced crime thriller.”—Chicago Sun-Times“A smart, stylish debut. . . . The dialogue is snappy and crisp, and characters pop off the page. The plot flows along swimmingly with plenty of surprises.”—The Boston Globe“A provocative novel that captures the grittiness of the Windy City and spins a murder mystery with a satisfying and out-of-left-field ending. . . . Wonderfully reminiscent of Raymond Chandler.”—USA Today