The Fall of the House of Zeus: The Rise and Ruin of America's Most Powerful Trial Lawyer (Hardcover) 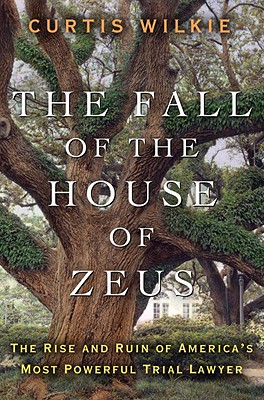 The Fall of the House of Zeus: The Rise and Ruin of America's Most Powerful Trial Lawyer (Hardcover)

“Over the past four decades no reporter has critiqued the American South with such evocative sensitivity and bedrock honesty as Curtis Wilkie.”
—Douglas Brinkley

The Fall of the House of Zeus tells the story of Dickie Scruggs, arguably the most successful plaintiff's lawyer in America. A brother-in-law of Trent Lott, the former U.S. Senate Majority Leader, Scruggs made a fortune taking on mass tort lawsuits against “Big Tobacco” and the asbestos industries. He was hailed by Newsweek as a latter day Robin Hood, and portrayed in the movie, The Insider, as a dapper aviator-lawyer. Scruggs’ legal triumphs rewarded him lavishly, and his success emboldened both his career maneuvering and his influence in Southern politics--but at a terrible cost, culminating in his spectacular fall, when he was convicted for conspiring to bribe a Mississippi state judge.

Here Mississippi is emblematic of the modern South, with its influx of new money and its rising professional class, including lawyers such as Scruggs, whose interests became inextricably entwined with state and national politics.

Based on extensive interviews, transcripts, and FBI recordings never made public, The Fall of the House of Zeus exposes the dark side of Southern and Washington legal games and power politics: the swirl of fixed cases, blocked investigations, judicial tampering, and a zealous prosecution that would eventually ensnare not only Scruggs but his own son, Zach, in the midst of their struggle with insurance companies over Hurricane Katrina damages. In gripping detail, Curtis Wilkie crafts an authentic legal thriller propelled by a “welter of betrayals and personal hatreds,” providing large supporting parts for Trent Lott and Jim Biden, brother of then-Senator Joe, and cameos by John McCain, Al Gore, and other DC insiders and influence peddlers.

Above all, we get to see how and why the mighty fail and fall, a story as gripping and timeless as a Greek tragedy.

CURTIS WILKIE graduated from the University of Mississippi in 1963. He was a national and foreign correspondent for the "Boston Globe "for twenty-six years. Wilkie is the author of "Dixie "and coauthor of "Arkansas Mischief." He and his wife, Nancy, live in Oxford where he teaches journalism and is a fellow at the Overby Center for Southern Journalism and Politics at Ole Miss.

"In telling a great legal story about a great legal story teller, Wilkie has produced a page-turning masterpiece that explores power, greed, hubris and the human condition. The Fall of the House of Zeus is a Greek Tragedy set in the modern south. Lawyers, clients, and anyone interested in seeing how the sausages of justice get made will love this book."--Alan Dershowitz

"The legal machinations in The Fall of the House of Zeus read like a real-life John Grisham novel."--St. Louis Post-Dispatch (Chosen as one of the Best Books of 2010)

"Not since Willie Morris has anyone written so poignantly about the South."--John Evans, proprietor of Lemuria Books, Jackson, MS in Missippians magazine.

"Fascinating, breath-holding action…The undisputed accuracy of recorded dialogue will fan embers that will keep this story alive for decades—not only in Mississippi…but anywhere obscene wealth, arrogance, and narrow-mindedness grant us human beings a look into the darkest rooms of our hearts."—Clyde Edgerton, Garden & Gun

"Every bit as engaging as a Grisham thriller..."--Delta Magazine

"The Fall of the House of Zeus is a riveting American saga of ambition, cunning, greed, corruption, high life and low life in the land of Faulkner and Grisham. These are good ol' boys gone bad with flair, private jets, and lots of cash to carry. Curtis Wilkie, a child of the South and a reporter's reporter, is the perfect match for this wild ride."—Tom Brokaw

"Addictive reading for anyone interested in greed, outrageous behavior, epic bad planning and character, lousy luck, and worst of all, comically bad manners.   Wilkie knows precisely where the skeletons, the cash boxes and the daggers are buried along the Mississippi backroads.  And he knows, ruefully — which is why this book demands a wide audience — that the south, no matter its looney sense of exceptionalism, is pretty much just like the rest of the planet."—Richard Ford

"Almost feels like a John Grisham novel…but at no point is it fiction. The Fall of the House of Zeus is a great read."—Desoto Times Tribune

"Riveting….a remarkable illustration of how far the mighty can fall."—Publishers Weekly (starred)