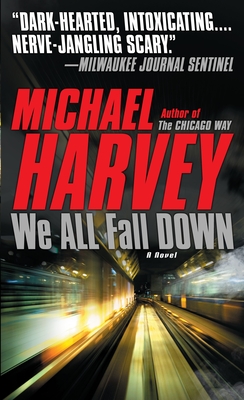 This is book number 4 in the Michael Kelly Series series.

A light bulb falls in a subway tunnel, releasing a deadly pathogen.

Within hours, a homeless man, a cop, and then dozens more start to die.

Chicago is on the verge of chaos before the mayor finally acts, quarantining entire sections of the city. Meanwhile, private investigator and former cop Michael Kelly hunts for the people responsible. The search takes him into the tangled underworld of Chicago’s West Side gangs and cops on the take, and the terrifying world of black biology—an elite field operating covertly at the nation’s top labs, where scientists play God and will do anything necessary to keep their secrets safe.

Michael Harvey is the author of The Chicago Way, The Fifth Floor, and The Third Rail and is also a journalist and documentary producer. His work has won multiple Emmy Awards, and has received two Primetime Emmy nominations and an Academy Award nomination, among numerous other awards. He holds a law degree from Duke University, a master’s degree in journalism from Northwestern University, and a bachelor’s degree in classical languages from Holy Cross College. He lives, of course, in Chicago.

“Harvey does for the Windy City what Michael Connelly did for Los Angeles: He commandeers it, warts and all, and wrangles it into his fiction.” —Chicago Tribune

“[Harvey] weaves Chicago history and politics with the conventions of mystery writing to create meditations on power—how it’s used, who it helps, and the way it hurts. . . . Honest, smart and funny.” —Chicago Sun-Times

“The suspense hums and the dialogue is truthfully tough, but it’s the writing that elevates Harvey to the top of the PI genre. He’s the best Chicago novelist . . . since Nelson Algren.” —The Plain Dealer

“Harvey is a budding superstar.” —The Daily News

“Multiple threads come together but not before the final pages. Until then, Harvey twists the plot like a braided rope, ratcheting up tension with the ensuing pages.” —The Missourian